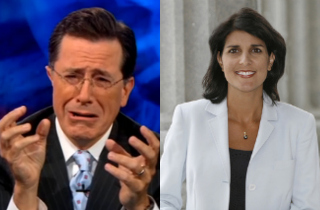 Despite a PPP survey that found Comedy Central host Stephen Colbert to be the most-preferred candidate to replace resigning Senator Jim DeMint (R-SC), South Carolina Gov. Nikki Haley announced this afternoon that she has no intention to appoint a placeholder.

“As I continue to consider the impending U.S. Senate vacancy, many have discussed the possibility of a ‘placeholder’ appointee who would pledge to serve for only two years and not seek election to the seat in 2014. While there are some good arguments in favor of that approach, I believe the better case is against it.

“I do not want to tie the next U.S. Senator from South Carolina’s hands regarding future office. I do not want to deprive our state’s citizens of the chance to render their judgment on the appointee’s performance by way of their vote. Most importantly, while I am an avid supporter of term limits, I do not want the effectiveness of our state’s new U.S. Senator to be undermined by the fact that he or she will automatically be leaving the office such a very short time after assuming it.
“I believe South Carolina will be best served by a U.S. Senator who will work hard day in and day out, and put him or herself before the voters at the soonest possible time. Accordingly, I reject the option of a ‘placeholder.’”