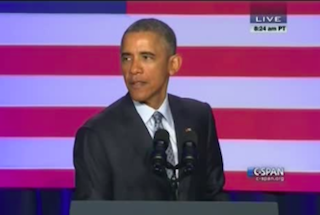 Sen. Rand Paul (R-KY), who is almost certainly preparing to run for president in 2016, got a special shout-out during President Barack Obama’s speech to the DNC’s winter meeting Friday morning. And rather than single out Paul for criticism, the president held him up as one Republican who is actually trying to reach out beyond his base.

The audience of Democrats groaned at the mention of Paul’s name, but Obama stopped them. “No, Rand’s an interesting guy,” he said to laughs from the crowd. “No, he is.”

“And Rand Paul said that the Republican Party is to show up on the south side of Chicago and shout at the top of its lungs that the GOP is the ticket to the middle class,” Obama continued, calling that instinct “encouraging,” adding, “I want parties to compete everywhere, I think that’s a good thing.”

Noting that he was just “back home” in Chicago the day before, Obama said, “I guarantee you that Senator Paul would be welcome there.” He added, “We are a friendly bunch. I mean, it’s a little strange if people show up and just start shouting at the top of their lungs, but we’re friendly and it would be OK.”

But ultimately, Obama told Republicans that can’t just “talk the talk,” they’ve got to “walk the walk” when it comes to supporting policies that help the middle class. “We have been walking the walk,” he said of Democrats. “And if Republicans are serious about taking on the specific challenges that face the middle class, if they are prepared to walk the walk, we should welcome them.”

It was during his 2014 speech at CPAC that Paul made his comments about Republicans visiting Obama’s home city. “We need a Republican Party that shows up on the South Side of Chicago, and shouts at the top of our lungs: ‘We are the party of jobs and opportunity. The GOP is the ticket to the middle class,'” Paul said at the time.