O’Donnell Tears Into WH Press Corps: They Think ‘Their Questions Are More Important Than The President’s Answer’
video

O’Donnell Tears Into WH Press Corps: They Think ‘Their Questions Are More Important Than The President’s Answer’ 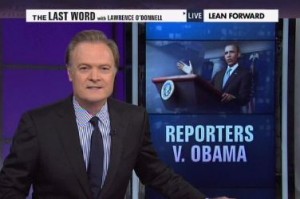 O’Donnell used the words of Dwight Eisenhower to say that the introduction of cameras to press conferences has been a “disturbing influence” on how much members of the press corps vie for the most attention-grabbing question. He argued that the president is always asked about procedure and emotion instead of the intricacies of certain policy positions.

O’Donnell ripped ABC’s Jon Karl for asking Obama if he thinks he has run out of “juice” to get his agenda through Congress, and mocked CNN for going all-out with a huge chyron from the joke Obama made in response to it. And even when the press corps has substantive questions to ask, O’Donnell pointed out that the answers generally help the public learn absolutely nothing new.

He contrasted this attitude with how the foreign press conducts themselves during presidential press conferences, and declared that the White House press corps “want[s] to hog the cameras for themselves.”