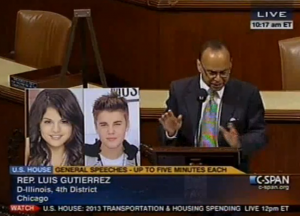 Rep. Luis Gutierrez took to the House floor on Wednesday morning to address Arizona’s immigration law — particularly the portion of it that the Supreme Court refrained from striking down. Railing against what he saw as the inherent racial profiling in the policy, Gutierrez hammered his point with what was basically a game of Guess Which One’s The Immigrant.

Beside an easel that presented side-by-side pictures of the celebrities he invoked, Gutierrez said the “show me your papers” aspect of Arizona’s policy isn’t just a problem for anyone who looks “like they might have come to America from somewhere else. It’s a problem for every American who cares about freedom.” Sarcastically commending Arizona law enforcement for being able to discern undocumented immigrants not by their looks, Gutierrez said, “Maybe with practice we can all become like Arizona politicians and police officers who are able to telepathically determine who to accuse of not belonging in America.”

With that, he commenced with his quiz. First up: Geraldo Rivera versus Ted Koppel. We might venture to guess Rivera’s not from this country, he said, but his mustache certainly wouldn’t confuse Arizona officials. Rivera was actually born in Brooklyn, he informed, but Koppel? He “was born in Europe, moved to flee from Hitler and Nazi Germany.”

Round Two: Justin Bieber versus Selena Gomez. One half of this couple is helping the other get accustomed to American ways. Gutierrez began to say how he’s sure Bieber’s been a great help to Gomez — but, wait! Gomez is from Texas, and she’s the one helping Bieber, who hails from Canada. He even had a personalized message for the heartthrob: “Justin, when you perform in Phoenix, remember to bring your papers.”

Round Three: Jeremy Lin versus Tony Parker. Lin clearly sounds foreign, he said, but an Arizona official would know that it’s Parker who came to America from Belgium. And finally, Round Four: Supreme Court Justice Edition. Sonia Sotomayor versus Antonin Scalia. Who’d look more suspicious in a Starbucks? “Neither is an immigrant,” Gutierrez said. “But Justice Scalia’s father came through Ellis Island from Italy, and Sonia Sotomayor is a proud Puerto Rican with generations of U.S. citizen ancestors.”

Trick question, sir. Gutierrez boiled down his point: “The idea that any government official can determine who belongs in America and who doesn’t simply by looking at them is completely ridiculous, unfair, and un-American. And yet this absurdity is the law of Arizona.”

Take a look at his speech, via C-SPAN: