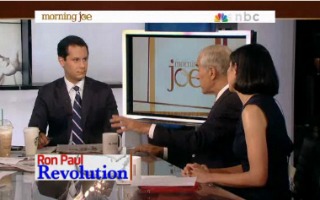 Ron Paul stopped by Morning Joe on Wednesday, where he discussed a range of issues, from whether he believes Mitt Romney has “core convictions” (Short answer: Yes, although Paul would ultimately like to change the GOP’s core convictions), to the delegates he’s obtained, to entitlement programs.

At one point in the segment, panelist Mike Barnicle asked Paul whether he was “headed in the direction of eliminating programs like Social Security, Medicare, and Medicaid.”

RELATED: Ron Paul To Wolf Blitzer: There Is ‘No Way’ I Am Ready To Endorse Mitt Romney

It’s a time sequence. And as adamant as I am about the purity of a philosophy, I’m also very pragmatic. You know, I want to get rid of the fed, but don’t want to get rid of the fed tomorrow. What I want to do is have competition with the fed and let the fed self-destruct. And when it comes to welfare, as a matter of fact, I probably am the best protector of Social Security and some of these programs for child health care and elderly health care because we can’t afford it. We’re going bust and it’s all going to collapse and you have ObamaCare, it’s totally destructive to the medical care system.

I’m saying, save — I want to cut a trillion dollars out of the budget, but a lot comes from overseas funding and war and I say this is the only way we can preserve some of these programs and work our way out of it. I want young people to opt out of Social Security, but my goal isn’t to cut. I think this is where the Republicans make a mistake. They’re seen as cutting food stamps and increasing the military budget. I think that’s bad politics and so, in my more pragmatic stance on how we get to the place where i want to go, actually, I’m offering a program where some of the programs we have taught people to be so dependent on, I would probably preserve them longer than others because we’re going to lose them because of the bankruptcy that is coming.

Barnicle followed up by asking Paul whether he feels any obligation to talk to the younger generations or instrust them about “the fact that there has always been a social contract among Americans from one generation to another, to help those who need help the most.”

“Yeah,” Paul replied, “but not through government. The best way you can help people is to have freedom and free market incentives, production, sound money.”

“Well, I mean, is there… You just told younger generations that they should ween themselves off this social contract,” Stein responded. “But you haven’t done it yourself.”

“Social security, like I said, I would preserve the Social Security the best I can,” said Paul, “but we want to get off. But this is one program we were supposed to be paying into an insurance program.”

“I understand that,” said Stein. “Don’t you think you should have set a good example for the future generations?

Paul then compared Social Security to other programs and institutions like the post office, government highways and banks.