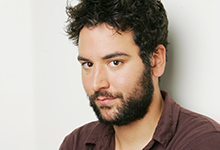 Who: Josh Radnor, Malin Akerman, moderated by Katey Rich
What: “Meet the Filmmakers”
Where: Apple SoHo
When: March 1, 2011
Thumbs: Up

Josh Radnor, director, star, and writer of Happythankyoumoreplease, which comes out this week, said that he hoped to make a movie that was “real,” “sincere,” and full of “grace.” While the clips they screened from the movie conveyed that sentiment, it was Radnor himself who echoed the point with his friendly demeanor and classy attire to boot (he “suited up,” as one member of the crowd pointed out).

Radnor, who was behind the camera for the first time, credited  his cast for making his work easy. Originally, Radnor didn’t intend to direct the film but said that he couldn’t imagine having to transfer his vision to someone else. Especially because he’d be there on the set and likely be “annoying” the director the whole time anyway. Malin Akerman, who stars in the film, said that Radnor was a natural and brought his story beautifully to life. After reading the script once, she fell in love with her character. Even a year-and-a-half since shooting the movie, it’s obvious that Akerman still feels connected to that character, Annie.

For his part, Radnor stated that he was happy to be able to cast not only some well-known actors but also ones who understand what it’s like to go outside themselves. For instance, Tony Hale plays a more serious part in this film than Arrested Development fans will be used to, but one they should warm up to by the film’s end, Radnor said. That’s true for the director, too. It might be hard for some people to see Radnor in a different role apart from “Ted Mosby” on CBS’s How I Met Your Mother, but over a short period of time audiences will undoubtedly want to get to know more Radnor characters.

So often at these press events, someone will raise his or her hand and ask for advice on how to break into Hollywood. Ordinarily, the actor will give a polite but curt response about working hard and pursuing a dream. Radnor, however, gave a complete answer with his life story complete with the highlights and setbacks he ran into along the way. Ultimately, he said that the best thing to do is to enroll in graduate school and to take the studies seriously. Read everything you can, learn as much as possible. It was the most honest and realistic answer to this common question we’ve ever heard from someone famous.

We’ll gladly add on one more piece of advice, based on Radnor’s performance: Enjoy what you do.

What They Said
“I love New York and I don’t hate Los Angeles.”
– Josh Radnor says that many people think they have to choose a city, when you can simply love both

“So much of this business is bluffing.”
– Josh Radnor responds to Akerman’s revelation that she had to convince Radnor she could take on the lead role

“These are the films that are the heart and soul of acting.”
– Malin Akerman praises independent, small films for supplying something different than Hollywood does

“The kind of movies I want to watch and to do as a director are about real people doing real things.”
– Josh Radnor believes in telling the truth

Panel Nerds don’t like…Rabblerousers
Just because Radnor stars on a show that airs on the same network as Two and a Half Men doesn’t mean he should be asked for his thoughts on Charlie Sheen. If he did feel a certain way toward the controversial actor, do you think Radnor would say so in public at a taped event? Radnor fielded the question with the proper hesitance and agility, saying that his show has nothing to do with Sheen’s. Then he let out a distinct “Oof” before moving on to the next question.