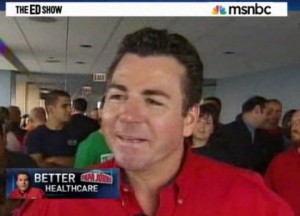 Papa John’s Pizza CEO John Schnatter has apparently had trouble swallowing the results of this year’s election, as he has continued his public relations offensive against President Obama‘s Affordable Care Act by insisting that his company’s owner-operators would cut employees’ hours in order to avoid having to cover them under the new law. Schnatter claimed, this past summer, that the law would cost Papa John’s customers 11 to 14 cents per pizza (according to Forbes, it’s actually about 4 cents per pie), but now figures his franchise owners are so greedy that they’ll shave that margin even further by screwing their employees out of health benefits with scheduling gimmicks.

On Monday night’s The Ed Show, host Ed Schultz blasted Schnatter’s ostentatious wealth in the face of such cheapitude, pointing out that while he begrudges his employees a dime’s worth of health insurance, Schnatter gave away 2 million pizzas as a promotion, and lives on a ridiculous estate with a turntable for his limousines:

The internet is abuzz with ire at Schnatter’s remarks, coupled with his conspicuous estate, and as Sam Stein pointed out in the segment, the cost of health care under the new law represents a tiny fraction of Papa John’s operating expenses, but for those of us who supported health care reform, and those of us who will pay for it, Schnatter’s real crime is not thanking us for the millions of dollars we’re saving him.

Schnatter has tried to play the concerned pragmatist on Obamacare, but make no mistake about it, this is a purely partisan PR offensive, and I do mean offensive. In August, Schnatter seemed unfazed by, or unaware of, the widespread revulsion at the notion that it might not be worth eleven cents per pizza to provide his employees with health insurance. What American wouldn’t say, “Here’s a quarter, John, give ’em dental and vision, too?”

But now, he”s trying to convince people that the people who own his franchises, who pay John Schnatter a fee to use the good Papa John’s name, and must, therefore, abide by the company’s policies, won’t even eat that 11 to 14 cents, and will cut their employees’ hours below the 30 hour threshold requiring them to provide health insurance. This is, itself, a completely fallacious argument, since if it’s true, they must already be doing it. Papa John’s has always offered health insurance to full and part-time employees, as many corporate employers do, and those benefits are based on the number of hours worked. Schnatter is admitting that his franchisees are baiting employees with the promise of health benefits, but will manipulate their schedules to avoid providing them. That may or may not be true, but it’s not something a businessman ought to be bragging about. Those owner/operators are paying big franchise fees, and getting absolutely poisonous PR in exchange. From Forbes:

His remarks have sparked anger on the internet, one thread on social news site Reddit, titled “There are plenty of places to get cheap s***** pizza in the world- Anyone else on reddit ready to boycott Papa John’s?” has captured more than 21,000 up-votes and 4,500 comments. A host of Facebook groups with the same idea have cropped up in the past 48 hours.

Meanwhile, shares in Papa John’s International have been tumbling since last Thursday, falling from $51.70 at market close Wednesday to $49.22 on Monday, a 4.2% drop.

The problem with boycotting Papa John’s (aside from the fact that it’s hard to refuse to buy pizza from a chain you already don’t buy pizza from) is that it actually hurts the employees on whose behalf we’re all outraged. A far better solution would be to send a check for $0.14 to John Schnatter every time you buy a pizza. Concerned citizens could also organize a Tipcott™, wherein they order the cheapest thing on the Papa John’s menu, then give the driver, like, a 100% tip.

What’s really galling about Schnatter’s stance isn’t his obnoxious wealth, or his utter dishonesty, but his complete lack of gratitude, on every level. Whether or not his franchise operators really are that greedy, Obamacare figures to save Schnatter a lot more money than it will ever cost him. First of all, if one of his shift managers gets cut to 29 hours per week, that shift manager will be eligible for Medicaid, thanks to Obamacare. Papa John gets cheap labor, and we all pay for their health care. Even better, those employees won’t get sick and die. It’s tough to place a dollar value on that, but 14 cents sounds low.

But the Affordable Care Act also requires insurance companies to allow children to remain on their parents’ insurance until they’re 26 years old, which means that even though Papa John must offer insurance to full-time employees, those 26 and under probably won’t need to take it.

This whole flap really underscores the entire point of health care reform, which is that even if Papa John’s doesn’t have its employees’ backs, President Obama does, and so do the rest of us. No one should have to die for 14 cents worth of pizza. Not in America.