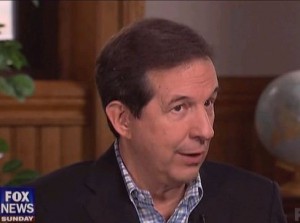 During his interview with Paul Ryan this morning, Chris Wallace grew frustrated with the vice presidential nominee’s explanation of the Romney/Ryan economic plan. Tackling the issue of tax cuts, Wallace confronted Ryan with the Obama campaign’s calculations, which Ryan deemed false. Asked to provide his own math, Ryan reverted to generalizations.

Ryan said the campaign has offered specifics, but the problem is that many people don’t know those specifics. Giving him the chance to do just that, Wallace said, “Let’s talk specifics. You’re the master of the budget. So, briefly, let’s go through the plan.”

The Obama campaign says the Romney/Ryan 20-percent tax cut would cost $5 trillion over 10 years. Asked whether that’s true, Ryan said it isn’t “in the least bit.”

Wallace asked how much it would cost, then, and Ryan said it’s “revenue neutral.” Not satisfied with the response, Wallace repeated his question — and Ryan repeated his answer.

Ryan went on to note their campaign’s plan to close loopholes and limit deductions. Following his explanation, Wallace noted, “You haven’t given me the math.”

“I don’t have the — It would take me too long to go through all of the math,” Ryan replied. He continued:

But let me say it this way. You can lower tax rates 20 percent across the board by closing loopholes and still have preferences for the middle class for things like charitable deductions, home purchases, for health care. What we’re saying is, people are going to get lower tax rates and therefore they will not send as much money to Washington. And they’ll keep it and decide for themselves.

Despite Ryan’s repeated explanations, Wallace wasn’t able, in the end, to get any math.