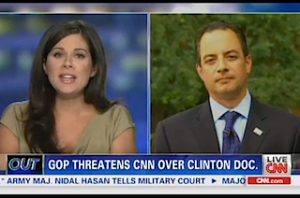 RNC chairman Reince Priebus took his campaign against CNN to… CNN Tuesday night. Priebus spoke to Erin Burnett about his ultimatum to CNN and NBC to drop planned film projects about Hillary Clinton if they want to host GOP debates in 2016.

Asked how he knows how CNN’s documentary film about Clinton will be biased towards the Democrats, he said, “I don’t think it matters if it is really negative or really positive” since elections hinge on “popularity.” He added, “Unless you’re an idiot like Anthony Weiner, generally these are positive developments for candidates. It builds up that cult of personality and CNN is going to play a role in it.”

Burnett agreed with Priebus that there were too many primary debate in 2012, but then subjected him to a greatest hits montage of debate fails from his candidates that ran that year. She asked him if all he’s really trying to do is “feed your base” and score points against the “liberal media.”

“If your company is so interested in spending million of dollars in promoting Hillary Clinton,” Priebus said, “then that is a choice as a news agency that is trying to be, or at least claims to be fair, ought to stop in their tracks and think about what the effects of that are. If you don’t care, or if CNN doesn’t care, that’s fine, then I don’t care either. We move on without CNN and without NBC. It’s pretty simple. There’s plenty of media throughout for us to work with.”

After listing the myriad of platform options beyond the two networks in question (and the obvious beneficiary Fox News), including radio and “Lincoln-Douglass debates,” Priebus told Burnett, “The sun doesn’t rise and set with CNN and NBC.”

Finally, Burnett confronted Priebus with the words of Fox News president Roger Ailes, who in 2008 chided Democratci candidates for boycotting a debate on his network. “Any candidate of either party who can not answer direct, simple, even tough questions from any journalist runs a real rick of losing the voters,” Ailes said then.

Priebus was not moved by Ailes’ words, saying candidates “can come on your show every night if they want to. And they can take all the tough questions in the world. The question is, if the party is going to spend time and money and resources in organizing an intelligent and reasonable debate calendar, should we have networks and moderators that promoting Hillary Clinton depose our candidates? And I say no way.”