Producers Of Fox’s MasterChef Apologize After Getting Caught Faking Footage 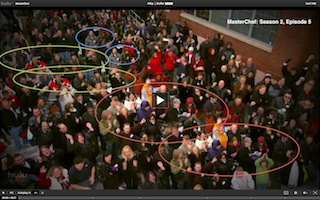 The producers of Fox’s MasterChef have been forced to release an apology after an eagle-eyed Redditor caught them flagrantly faking footage. Of course, as most reality TV shows have as much in common with reality as an animated movie about a world of sentient cars, this is as necessary as forcing a professional wrestling producer to apologize for faked body slams. Still, since many Americans remain as naive to the genre’s tricks as my third grade best friend was to the WWE’s, stories like this remain hilarious and instructive.

A little background. MasterChef is a show where a bunch of contestants with different accents and hairstyles stand around a shiny kitchen getting yelled at by some priggish host, all the while everyone attempts to get as much product placement on camera as possible. At least I’m assuming. I’ve never watched MasterChef. However, since I’ve managed to see, well, any other cooking competition reality show ever, I’ve got an educated guess as to how it works.

Anyway, in the opening moments of a recent episode, the MasterChef producers showed footage of the “thousands who applied” waiting for the audition of their lifetime. However, a viewer noticed that the crowd had been manipulated to appear bigger with many of the people repeated throughout the shot making it look like the crowd in a sports video game from 10 years ago.

I guess, all the country’s aspiring chefs were too busy at one of the other 20 cooking shows’ auditions of a lifetime.

After the viewer posted a screen capture to Reddit, the producers of the show, Reveille Productions, released a statement to Entertainment Weekly:

“We have reviewed the footage and it’s clear that the scene was enhanced in post-production. We sincerely apologize to our viewers and hope that they still enjoyed the show.”

“Reviewed the footage?” Yeah, you guys must have been shocked. Anyway, to translate that out of TV producer talk, I believe what they said is “Yes, we faked the footage. What are you gonna do about it? It’s not like anyone who watches this show gives a crap. Hey, look! We just found a Cajun chef with spiky red hair and a face tattoo! Isn’t that outrageous!”

Hmmm, maybe I should watch this show. Watching these clips totally makes it seem like a solid batch of entertainment that, one day, when I’m on my death bed, I’ll remember fondly and be happy I spent an hour a week watching.

Watch the offending clip from Fox below. The faked bit comes around the five second mark (and, since it’s a reality show, probably every other mark as well). The full-sized image from Reddit that points out all the digital trickery is here.