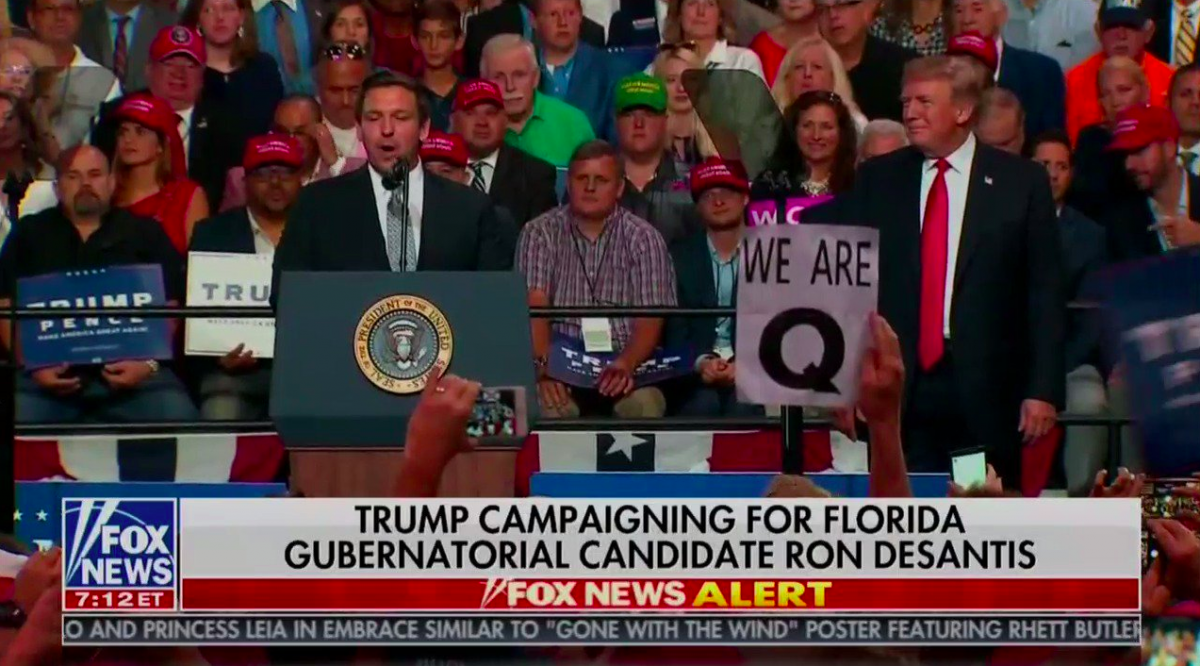 The QAnon conspiracy theory alleges that there is a global, multi-pronged Illuminati-esque force conspiring against the president and all things good and decent in the world, and Trump is standing steadfast against that force and working behind the scenes to take them down. The word itself comes from an anonymous 4Chan user who refers to himself simply as “Q,” which is a reference to a high-level government security clearance, while the “anon” part comes from Internet slang referencing an anonymous forum poster.

The theory started on fringe message board sites like 4Chan and 8Chan as early as fall of 2017, but has since spread to all corners of the Internet where baby boomer conservatives can be found. The man known as “Q” — which many who believe in the myth think is Trump himself or someone in his administration — began leaving clues, or “breadcrumbs,” behind for fellow MAGA supporters to find so they could learn about the president’s secret intentions to overthrow the evil globalist cabal.

Of course, all of these claims are totally baseless and unfounded, but that didn’t stop numerous Trump supporters from showing up to the president’s Tampa rally today flaunting #QAnon gear and attempting to push the conspiracy — which they may have, as a number of their claims appeared on broadcasts of the event, including Fox News and Fox Business.

Additionally, other Trump supporters arrived to the rally waving signs pushing the Seth Rich murder theories — another far-right conspiracy that claims the Democratic Party and Hillary Clinton are behind the killing of a young DNC staffer in Washington, D.C.

Check out shots of a few of the conspiracy theorists below:

People lining up for the Trump rally in Tampa today. A lot of the chan anons might treat Q-Anon like a LARP, but by all appearances there are plenty of people who take it seriously irl. pic.twitter.com/uys7kmnAs1

Crowd in Tampa ahead of the President’s rally includes one person bearing a Seth Rich conspiracy poster pic.twitter.com/Ax7cln6x8o

The QAnon headband made it on Fox! pic.twitter.com/tzP245sTGt

So QAnon and Seth Rich conspiracy signs have already made their debut on Fox News during the Trump rally pic.twitter.com/j3XwXJ5qvg