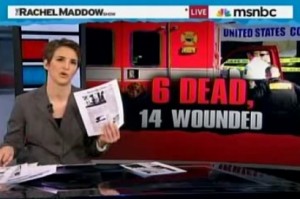 A restrained Rachel Maddow who had just finished listing roughly a dozen examples of mass shootings similar to that which tragically occurred in Arizona this weekend and said “Events like [the Arizona shooting tragedy] are not inconceivable, or unimaginable.” After pointing out that America is the most heavily armed country in the world “by a mile” Maddow asked “do we have any tools to stop the next American gun massacre?”

Some will see this as an attempt to revive the dormant debate over gun control — an issue that seems to have been lost to those who have chosen political expedience over wisdom. But it went beyond that. Maddow ostensibly called “enough” of the disturbing trend of American gun massacres, an occurrence that is certainly not unique to this country, but seems more common. Maddow said of this instance “Each new American gun massacre is both singularly horrific in its own way and its insane not to to acknowledge that it is part of a very clear, very frequently repeating pattern.”

In looking for answers for this tragedy, Maddow wrapped up by saying:

“What is consuming the national debate is whether the heated political climate in our country was a contributing factor to it. But whether political rhetoric motivated this kid or not. Whether this kid was sane enough to process political rhetoric as sane people understand it or not. Whether we will understand sooner or later or never the exact motivation behind this kid, behind this latest American gun massacre, here’s the question: do we have any tools to stop the next American gun massacre?”

In this segment, Maddow laudably avoided the finger pointing, or the trap of point a finger at another finger-pointer. She instead made a compelling case by stating the facts as we know them. And putting the debate over the political climate aside, it was a stark and important reminder that this is likely not the last American gun massacre that we will see in this well-armed country.