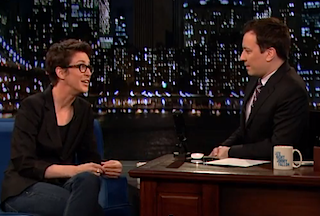 Before mixing up a classy martini for Jimmy Fallon, Rachel Maddow sat down with the Late Night host to fill him in on everything that’s been happening in the world of politics. Since Fallon’s not much of a political junkie, Maddow was really able to blow his mind with some of Republican strategies she called simply “amazeballs.”

But first, Maddow explained the Employment Non-Discrimination Act (ENDA) to Fallon, who was in disbelief that until the bill is signed into law you can still be fired for your sexual orientation or identity in 29 states. “One of the reasons [the House] doesn’t want to vote on it is because it’s already the law, which is–It’s not already the law! You guys need a different strategy, people can look that up.”

Moving on to Fallon’s good friend Chris Christie’s reelection in New Jersey, the host asked Maddow if this meant the governor was now first in line for the 2016 Republican presidential nomination. Maddow explained the Fallon that Republicans think they made a “mistake” by nominating the “relatively centrist” John McCain in 2008 and Mitt Romney in 2012.

“I think it’s amazeballs that that’s how they think about it,” she added. “Definitely pick the craziest guy you can find, that’s your ticket to success!”