Rahm Emanuel To TV Interviewer: ‘You Are Wrong And A Bully… I Don’t Care About You’ 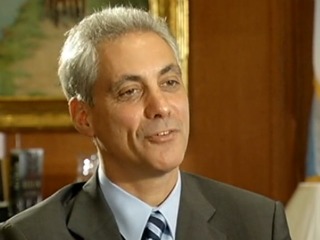 When asked where his children will attend school in Chicago (a question previously posed to Barack Obama as he prepared to leave Chicago for the White House), the mayor responded by telling NBC reporter Mary Ann Ahern that it was a private, family decision. Fair enough. When pressed by Ahern, however, Emanuel responded thusly:

Again, fair enough. Harsh, but understandable. He has a point, even if his constituents might like to know whether his children attend a public or private school and, as such, what his personal experience with the school system might be.

Emanuel then stood to leave, and the cameras stopped rolling. Ahern tried to explain the context and importance of her question and that’s when, she says, Emanuel grew angry:

As I tried to explain further, Emanuel doubled back. He looked directly at my two college interns, and said, “You are my witnesses.”

Then, the Mayor of Chicago positioned himself inches from my face and pointed his finger directly at my head. He raised his voice and admonished me. How dare I ask where his children would go to school!

“You’ve done this before,” he said.

This was the Emanuel we had heard about, and it was one of the oddest moments in my 29 years of reporting.

Later, Ahern gave Emanuel a call in an attempt to “clear the air.” When she told him she had felt bullied by his earlier actions, Emanuel responded in an Emanuelesque manner:

You are wrong and a bully. I care deeply for my family. I don’t care about you.

Take a look at the recorded interview for yourselves, courtesy of NBC Chicago: