Ray Rice: ‘Horrendous Mistake’ Not Apologizing to Janay, ‘Hope for a Second Chance’ 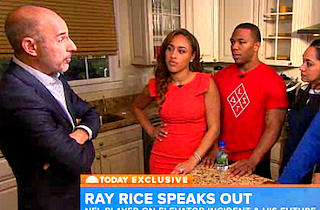 Former Baltimore running back Ray Rice spoke to Today show’s Matt Lauer, his first extended interview since he was suspended indefinitely from the NFL over an earlier incident of domestic violence. “I took full responsibility for everything I did, and all I can hope for is a second chance,” Rice said, hoping still for a career in football.

Rice discussed the infamous spring press conference, in which he did not apologize to his wife (in which, in fact, Janay Rice apologized for her role in the incident). Rice reiterated Janay’s claim on the show yesterday that the Ravens had scripted the conference.

“I made a horrendous mistake not apologizing to my wife,” Rice said. “We were given what to speak about. It wasn’t truly coming from us.”

RELATED: Janay Rice Describes Confronting Ray Rice: ‘Why Did You Just Leave Me There?’

“We all just want our lives back,” Rice said. “Football is one thing. But I realize the amount of people we’ve affected, the amount of families we’ve affected, that domestic violence is a real issue in society. We could take one bad night, it just happened to be on video, but we are truly sorry to the people that’s really going through it.”

Rice also said that he was willing to do anything to ensure Janay’s future, even if it meant not playing football.

“The one thing I want people to understand is she sacrificed her well-being for me,” Rice said. “Now the roles are reversed, and I will sacrifice my well-being for her. If I never played football again, I’ll be honest with you, that’d be my life, and I would sacrifice more so she could have a better future.”