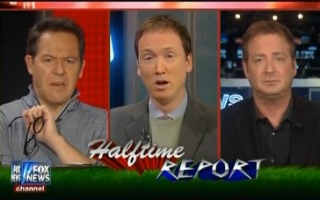 On too late Friday / too early Saturday’s edition of Red Eye, host Greg Gutfeld and his panel discussed Girls creator Lena Dunham‘s new ad for Obama, which has stirred up a fair amount of controversy and outrage (our favorite!) over its comparison of voting to having sex for the first time.

Panelist Tom Shillue felt that the ad, which is aimed at young voters, perfectly depicted young people’s relationship to Obama. “They say that it’s a metaphor for sex,” he said. “It’s not. It’s a metaphor for bragging about sex.”

Remi Spencer, meanwhile, while not offended by the ad, did find it to be, well. “Stupid.” It seems, she added, to just dumb down the discourse instead of elevating it. Matt Welch, for one, was uncomfortable with the “hero worship” that goes on where politicians are concerned.

Gutfeld felt the ad was geared towards those “Williamsburg hipsters” [Greg! They’re all in Bushwick now. There’s a Duane Reade in Williamsburg and smoothie shop in Wburg now, for crying out loud.] who are “actually acting as propagandists.”

Bill Schulz joked that the ad made him happy to still be a virgin. He also said people only watch Girls as catharsis because they’re glad they’re not young 20-somethings making all sorts of terrible mistakes [Which: Yes? Isn’t that exactly the point?] and referred to Dunham as a “tattooed potato.”

Gutfeld defended Dunham against the potato comment, but did admit the only watches the show for Brian Williams‘ daughter who is, in the parlance of our youth, “fine.”

Later, during the show’s Halftime Report, Andy Levy wanted to know why Shillue thought Dunham’s video (or, rather, Dunham herself) was gross. We learned that Gutfeld and Levy found her “adorable,” and that Levy thinks that, while the actress/writer/director/producer is smart and funny, this ad was a dud. Plus, Gutfeld made an excellent point: Would Shillue look any better in tattoos and a tank top?

Levy later said the oddest part of the ad is when Dunham says your first time should be with “a guy who drone kills the crap out of a bunch of brown people.”

And here’s the halftime report, for your enjoyment: