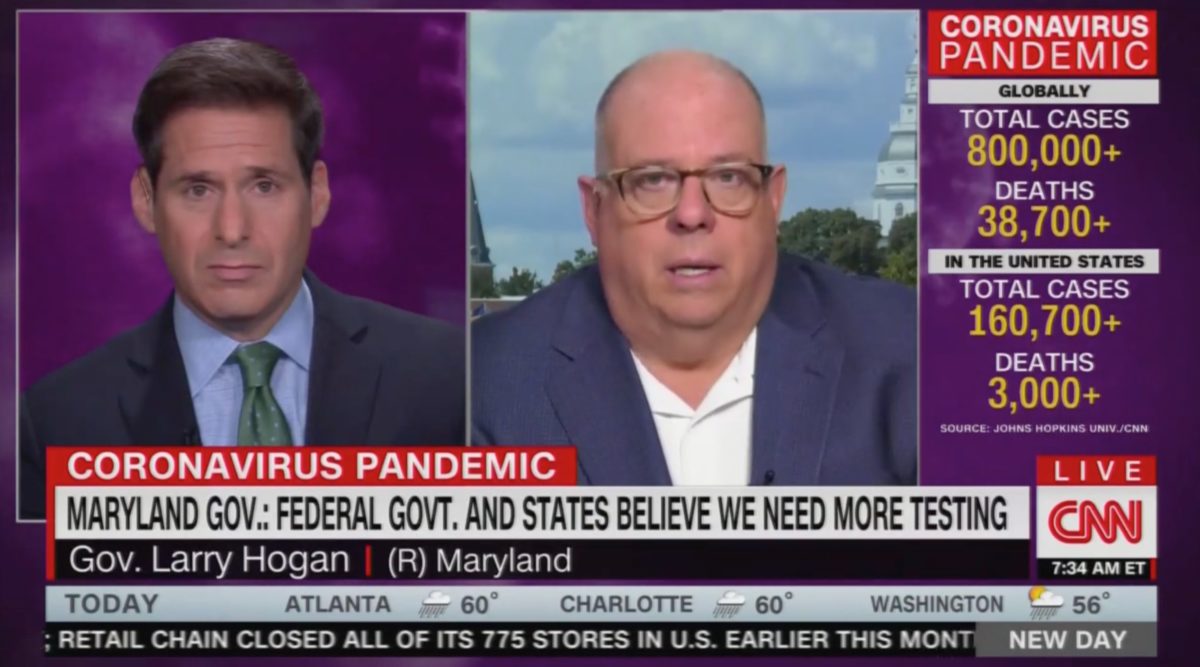 In a Monday conference call between Trump and rural state governors, Trump claimed that, “I haven’t heard anything about testing being a problem,” bragging, “We’ve tested more now than any nation in the world. We’ve got these great tests and we’ll come out with another one tomorrow that’s, you know, almost instantaneous.”

CBS News obtained audio of a call Monday between Pres. Trump and rural state governors about coronavirus. After Montana Gov. Steve Bullock discusses difficulty getting testing equipment, Trump says, “I haven’t heard anything about testing being a problem” https://t.co/ScO2YbKZAq pic.twitter.com/YhFPpw7Gni

When Hogan spoke to NPR’s Morning Edition Tuesday to discuss his state’s coronavirus response, he was asked for his reaction to Trump’s claim that testing problems have all been fixed.

When asked about how Trump is working with inaccurate information, Hogan deflected by saying information from the White House coronavirus task force has been accurate.

Hogan later gave an interview to CNN’s New Day, where he said, “there’s no question that the federal government and all of the states believe that we need more testing” and more medical supplies.

“Without the tests we really are flying blind,” Hogan continued. “We’re sort of guessing about where the outbreaks are and what the infection rate and the hospitalization rates are and the mortality rates.”

On a related note, CNN also took an interview from DeWine on Tuesday, and he spoke of how “we don’t have widespread testing.”

“That is not unique to Ohio,” he said, explaining why he expects coronavirus cases in his state to peak between mid-April and mid-May.