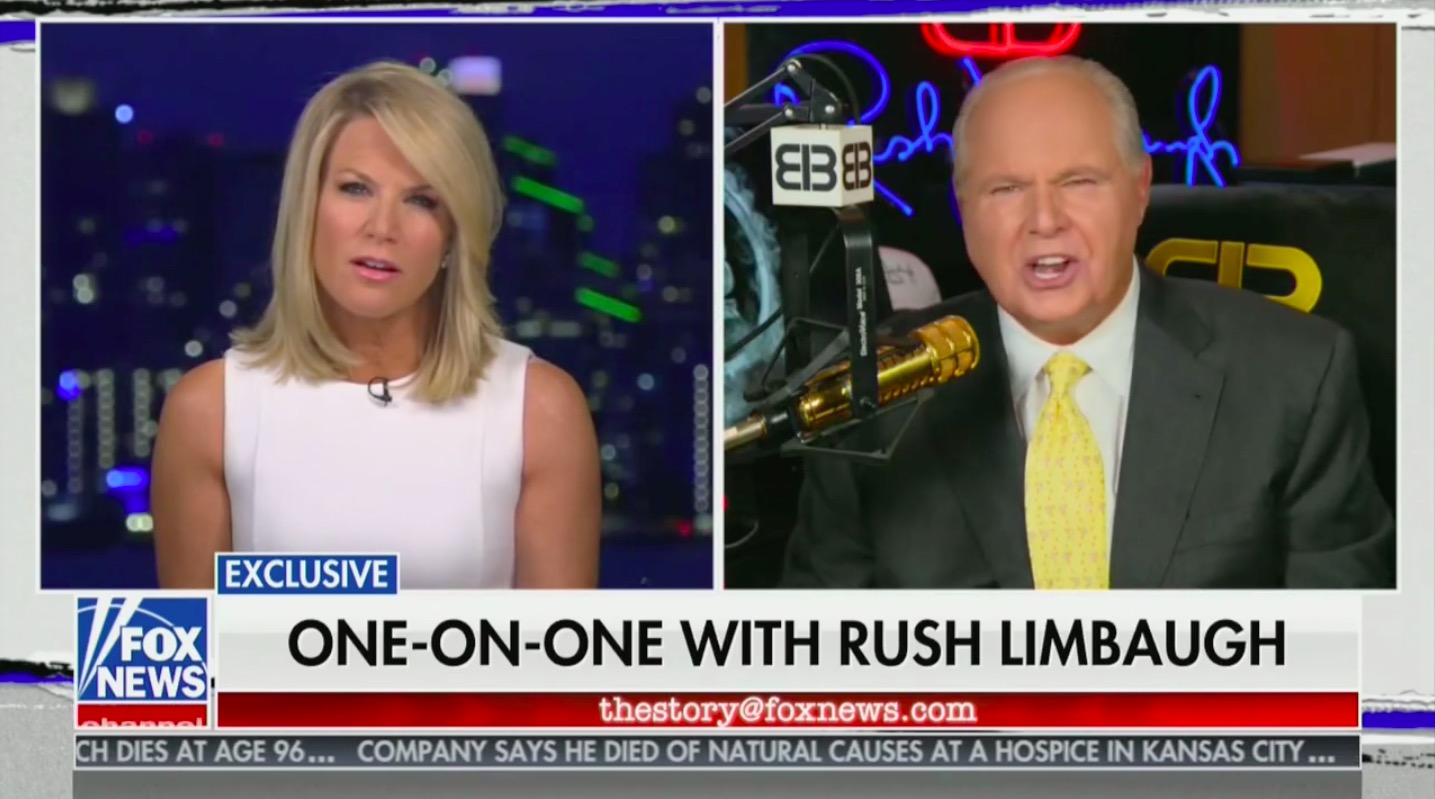 The divide at Fox News between its hard news programs (helmed by Bret Baier, Martha MacCallum, et al) and opinion programs (Sean Hannity, Laura Ingraham, et al) has been well covered on this site. Those lines were blurred this week, with the appearances of two conservative firebrands on a news program.

During the course of his hit, Limbaugh called for Hillary Clinton to be jailed for an alleged “silent coup” attempt against President Donald Trump. MacCallum did not push back on Limbaugh’s claims.

Nonetheless, the interview was clearly a hit for Fox: clips of it were aired on nearly every Fox News show the following day.

It was also the second time in recent weeks that Limbaugh was featured on a news program. Late last month, he steamrolled his way through an interview on Baier’s Fox News show. That too was surprising: Baier and MacCallum are known as the faces of the network’s serious news coverage, like the upcoming 2020 elections.

Wednesday night, another controversial commentator was featured on MacCallum’s show. Dan Bongino — a former secret service agent and InfoWars personality who scored himself a job as a Fox News contributor thanks to his loud invective aimed at the Mueller investigation — was invited on to debate the media response to the end of the probe.

It was a rare appearance on a news program for Bongino, who is usually confined to Fox’s opinion programs: Fox & Friends, Hannity, The Ingraham Angle and Tucker Carlson Tonight. The appearance also came a few months after the Daily Beast reported that Bongino was barred from Shannon Bream’s 11 p.m. news program. Bongino was banned because, in the words of a source who spoke to the Beast, he became “unglued” during an appearance.

“He’s not someone who would typically be on the news shows,” the source said.

UPDATE: After the publication of this story, Dan Bongino sent the following in an email to this reporter:

“Infowars personality”? I spent my twenties as a police officer in New York City & my thirties traveling the world as a lead advance agent in the Secret Service. I completed two graduate degrees & wrote 3 NYT best-selling books while you were writing low traffic click-bait pieces.

You live off of attacking others. You have nothing unique or valuable to offer the world other than invective and envy. I genuinely feel sorry for you and I hope you find peace someday. Guys like you could never hack it in the real world I lived in. Never.

After Mediaite responded noting that Bongino forgot to include his three failed bids for Congress in his list of accomplishments, he responded with a string of three more emails:

And the US Senate. Won two GOP primaries and lost one while you were writing about others doing it. Must be nice sitting in a Snuggie in momma’s basement writing about what other people actually do. You’re a joke. You’ve always been a joke. Your tweet, and your pathetic hit piece, will ONLY be read because I commented on it. How does that feel? How does it feel to know that I’ve done things you can only write about? How does it feel knowing you could never hack it in the real world? I’m serious when I say that I pity you.

BTW, I could tweet what I’m having for dinner and get exponentially more traffic on my account than your writing does. How does that feel?

Now many votes did you get in the primary and general you ran in?
Oh, that’s right.