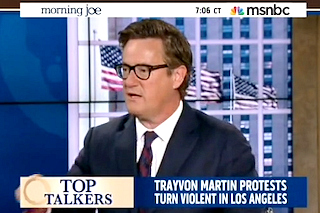 You know it’s bad when you’re looking back fondly on Richard Nixon’s share of the minority vote.

That was Joe Scarborough’s point when he linked the conservative press’ coverage of the Trayvon Martin story to the GOP’s inability to break into double-digits with African American voters.

“Why is it that Republicans, certain elements of our party, seem to go out of their way to inflame minority voters?” Scarborough asked his panel Tuesday morning. “I know I can count on conservative outlets to have a one-sided view, and to talk about how a dead boy had it coming, and he was on marijuana, he was on pot, he was this, he was that…I would like in my lifetime for the Republican Party to get more than six percent of the African American vote.”

Former RNC Chairman Michael Steele argued that the possible gains in minority votes were so slim, whatever the reason, that the GOP had little incentive to chase them. “Can we put on the table getting more than six percent is not going to happen in the next four years?” Steele said. “Even if those same voices you’re alluding to, Joe, had come out and were reasonable in their response as opposed to extreme in their response in some cases, there’s still a heck of a lot more that needs to be done than just saying something nice or politically correct in the Trayvon Martin case.”

Both Steele and Robinson agreed that stereotypes were in play, but Robinson made the point that with a conservative electorate growing whiter and whiter with each demographic shift, conservative outlets had even more reason to tailor coverage to racially-specific expectations.

“I have a suggestion: just because Al Sharpton is doing something and you hate Al Sharpton, doesn’t mean you help your party or your cause by going in the complete opposite direction,” Scarborough said. “Maybe sometimes discretion is the better part of valor. Maybe sometimes conservative outlets should sit back and not purposefully antagonize African Americans.”

Steele argued that the spin was spun on both sides. “It’s easier to fall into the stereotype and continue to project that than to actually sit back and recognize the reality that racism is still a sinister part of the culture and environment that African Americans, and quite frankly a lot of Americans, still have to live in,” Steele said. “It’s easier to project outward that that just doesn’t exist, because ‘I’m not that way, therefore anyone who brings this up must somehow be trying to stoke these flames, et cetera.’ I think it happens on both the right and left. I watched, as you did, to my great frustration, some on our network as well as other networks, stoke the flames in different directions, raising up images of the past with no linkage at all to the case.”