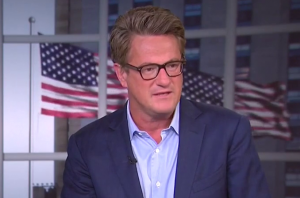 Host of MSNBC’s Morning Joe Joe Scarborough lambasted Hillary Clinton for comparing her GOP rivals to terrorists, calling the remarks “gutter politics at its worst” designed to distract from her email scandal.

“It was disgusting. It was absolutely disgusting,” Scarborough said. “Hillary Clinton saying that somebody who is pro-life– I mean, let’s tell the truth; she wanted us to talk about this. She wanted to throw a bright shiny object out there, so they don’t talk about the email scandal.”

“And so she has to be so hyperbolic and insulting and quite frankly just — it’s gutter politics at its worst to compare people to radical terrorists that cut off people’s heads and blow up grandmoms,” he said.

“It’s not all right. And we’ve seen by reporting what these terrorists do to young girls, the sexual slavery is absolutely appalling. And what Hillary Clinton did is compare somebody who is pro-life — which is close to 50% of Americans — to radical terrorists.”

Scarborough slammed the “sick radicalism” that is now “infecting” the Democratic Party. “If you’re Barack Obama, you compare Chuck Schumer to people shouting ‘Death to America’ in Iran? And if you’re Hillary Clinton, you compare pro-life Democrats and Republicans to ISIS? What happened here yesterday? This is so over the top.”

“If a Republican did this, the world would come to a halt,” noted Bloomberg’s Mark Halperin, “and it should be condemned in strong terms.”

“You know what was the most disgusting part of it? She was reading notes,” Scarborough said. “This was planned…. this is a strategy of her to engage in gutter politics to distract from the fact the FBI is investigating her, because she’s been called a liar by the American people.”