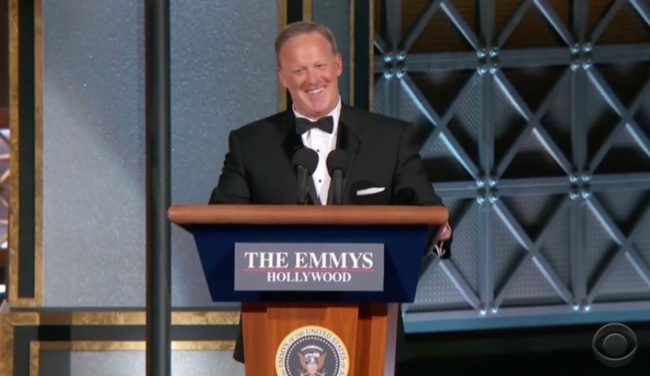 It is hardly a surprise when a Hollywood awards show inevitably turns left of a Democratic Party convention. In fact, the media occurrence as reliable as an entertainment award show basking in the “virtue signaling” of their overt liberalism is Sean Hannity defending Donald Trump, no matter how wrong he may be.

But even by this standard, last night’s Emmy awards show was extraordinarily politically correct and anti-Trump in nearly every manner imaginable. Heck, even the super liberal Hulu show The Handmaid’s Tale was a big winner.

It was so over-the-top that it felt like a parody The Onion might do on an awards show. It was so extremely PC that it made liberal ESPN’s ESPY awards seem as if they were produced by pro-Trump flame-thrower Milo Yiannopoulos.

The most dramatic attempt to milk the Trump phenomenon (it’s his media world, we are all just living in it) for laughs and political points came near the top of the show when former White House press secretary Sean Spicer made a bizarre cameo appearance. This occurred after host Steven Colbert suggested that there was no way for anyone to know how large their viewing audience was, and then suddenly Spicer appeared via an SNL-style motorized podium.

Spicer then quoted his own infamous lie from his first day on his ill-fated job when he absurdly claimed, in Orwellian fashion, that Trump’s modestly attended Inauguration had the largest audience ever. Period.

Personally, I will never forget that press conference because it was the moment that we realized, for sure, that we had left the gravitational pull of the rational earth with this presidency, and that the truth no longer had a shred of meaning in era of Trump. In short, we were no longer in Kansas, Toto.

The joke, which Spicer at least partly blew because he failed to wait for the crowd’s reaction to his presence to die down, was apparently supposed to work on multiple levels. One of them, ironically, seems to have been Colbert poking fun at the Emmys themselves because there is absolutely no way that the show was the highest-rated version ever. In fact, for a variety of reasons, including politics, it was far more likely to be the LEAST watched Emmys in history.

Of course, the more significant element of this gag is that Spicer was essentially making a joke about both Trump’s Inauguration Day delusions as well as effectively admitting that he knowingly lied to everyone in his very first press event. In a sense, he was turning his entire tenure and the Trump Administration itself into one giant joke.

Now, to be clear, I am no stick in the mud. I like a good bit of humor as much as anyone. I also recognize that the best way to deal with a major media mistake is usually to joke about it in a self-deprecating manner.

It is important to remember, however, that this was not some “gaffe” that Spicer was teasing us about. He didn’t make his “crowd” statement that day because of an accident or honest mistake. This lie was done by design, exactly as directed by president Trump.

In my view, this sketch missed the mark. It also, because Spicer has never done a serious apology for what happened that first day as well as the many other lies he felt forced to tell, crossed over a rather significant line.

Think about what Spicer did here. He admitted, while making a big joke out of the whole episode, that on his very first day on a job where he was paid by the American taxpayers to speak on behalf of the president of the United States, he knowingly said something significant (with great angry, even) which he knew to be literally laughably false.

And the crowd of Hollywood liberals loved it.

Have we really already fallen to the point, in this era where the president is retweeting videos of himself attacking Hillary Clinton with a golf shot, when this is something that is allowed to stand without even serious rebuke or condemnation? Amazingly, It feels like we have, and we are only eight months into this presidency!

The implications of this are actually pretty profound. If even the presidential spokesman can, with great passion, blatantly lie to the American people and then be forgiven/rewarded and “get out of jail free” by simply pretending that it was all just a frivolous joke, then who or what exactly keeps something like this from happening in the future on a topic more substantial than crowd size?

Certainly not the hypocrites in Hollywood.