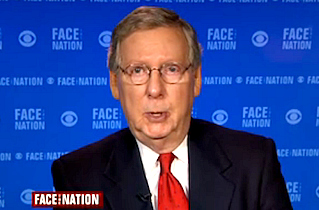 Having just gotten through the last round of brinksmanship over Department of Homeland Security funding, Congress immediately faces the next round: the debt ceiling, which has been the cause of at least one congressional catastrophe in the last four years and threatened two more.

The U.S.’s borrowing authority expires March 16, at which point Treasury Secretary Jack Lew said the Treasury will be forced to begin extraordinary measures to keep the U.S. government from defaulting on its debt. If the ceiling is not raised, the U.S. will not be able to further borrow and could run out of money in the fall.

On Face the Nation Sunday, Senate Majority Leader Mitch McConnell pledged not to allow default. “I made it clear after November that we won’t shut down the government or default on debt,” McConnell said. “We’ll figure someway to handle that, and hopefully it might carry some other important legislation we can agree on in connection with it.”

It was the legislation attached to the debt ceiling that nearly caused the default in October of 2013; demands for concessions led to more brinksmanship in February of 2014. (Congress also balked at the debt ceiling in 2011, leading to a downgrade in the U.S.’s credit rating.) McConnell ended up partnering with Senate Democrats to break a filibuster in 2014, going against much of his own caucus — the caucus he now heads as Majority Leader.

McConnell did not seem to feel much of a sense of urgency about the ceiling. “The debt ceiling will be handled over a number of months,” he said. “The Treasury Secretary has a number of what he calls tools in his toolbox.”