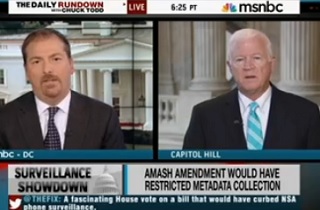 In hate-praising the Amash amendment’s attempt to actually do something (something stupid) about the government’s surveillance programs last night, I suggested that an easy solution (that will never happen) to the NSA’s collection of phone bill data would be to require the phone companies to retain the data, rather than destroy it. On Thursday morning’s The Daily Rundown, Sen. Saxby Chambliss (R-GA) explained to Chuck Todd exactly why that sort of solution will never happen, while also explaining why Americans shouldn’t worry about the true source of runaway surveillance powers, the FISA court.

Earlier in the segment, Todd interviewed Rep. Jard Polis, who supported the Amash amendment, which would have ended the National Security Agency’s collection of phone metadata, a collection it can only look at with a specific warrant from the secret FISA court. Polis agreed that the data is important, but because the Amash amendment was added to an appropriations bill, there was no way for them to add a provision requiring phone companies to retain the data.

As I said last night, this would certainly balm the hurt of those who are disturbed by the collection of phone numbers and call times, but no matter who stores the data, the process of getting a warrant to use it would still be a joke, would still rest in the hands of a FISA court that has a harder time saying “no” than a programming executive at NBC. As it happens, Chuck Todd then asked Amash amendment opponent Sen. Saxby Chambliss about both issues.

He began by asking about the FISA court, which rejects one out of every 3,086 warrant application, and correctly called it a check “in name only.”

“How do you create some reassurance that the FISA court is seriously doing serious oversight, and protecting the constitutional rights?” Chuck asked.

Chambliss explained that the FISA court doesn’t reject that many applications because the intelligence agencies are “very deliberate in making sure that when they go to the FISA court, they got their act together, and it is a real threat to the United States that they’re presenting to the FISA court.”

If that were really true, if they were really only asking for the slam-dunkiest of warrants, then that would mean the intel agencies aren’t fighting nearly hard enough for Americans. The entire point of an adversarial system is that it allows for one side to be as aggressive as possible. The point is, this is not an adversarial system. In 35 years, the FISA court has rejected 11 warrants, out of 33,979, and the government doesn’t even have to get one of those warrants before it conducts a search. They have up to 72 hours after the search to get a warrant.

“There are not very many of these cases in the scheme of things that are presented,” Chambliss continued, referring to the 1,789 FISA applications last year alone, all of which were approved. “When they are presented, the FISA court sometimes will say, guys, hey, this is not going to work. You need to either withdraw this, or you need to tweak it and come back to us. So there are reasons why the court does not reject — some of them are rejected kind of informally.”

So, Americans can rest easy because Saxby Chambliss promises that the court rejects things “informally,” and that the judges refer to intelligence officials as “Guys,” and maybe even “Duuude” on occasion, and wear Crocs to work if they want to, for all we know. Chambliss could tell us they use a ducking stool, and we’d have no way of knowing, because its a secret court.

Or as Sen. Chambliss says, “So this program is well overseen, Chuck.”

Chuck then asked Chambliss about the idea of fixing the data collection program. “Instead of the government collecting this data, make it so that the phone companies themselves, the communication companies, it’s archaic to call them phone companies, but these communication companies to archive the data themselves, and sort of create basically one extra level of safeguards, of privacy safeguards. Is that a workable compromise?” he asked.

Chambliss responded that “Actually, we looked at that. We’re continuing to look at that. We’re also looking at the fact to get a third party to store the data,” a party that would presumably be as effective a henhouse guardian as the FISA court is.

He added that “It’s a very, very expensive proposition to have the companies maintain these records,” which should tell you all you need to know about the chances any Republicans would support such a fix. For good measure, he added that such a solution would force agencies to got to “four, five, six or seven locations to get the information,” as if they’d have to deploy horsemen or ravens to the Kingdoms of Westeros. He’s apparently never hear of Kayak or eSurance.

All of this is moot, because no matter who’s holding on to the pile of phone bills that are freaking out all the liberal-tarians, there’s still going to be a joke FISA court holding the keys. What we need is an aggressive civil liberties body in that court to protect the interests of innocent Americans, which shouldn’t be that difficult. How hard could it be to find some ACLU lawyers who are more trustworthy than Ed Snowden?