Seth Meyers: Trump Running For President Is Excellent For SNL, Not Good For Anyone Else 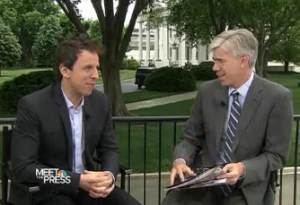 The star of the White House Correspondents’ Dinner, Saturday Night Live comedian Seth Meyers, taped an appearance on Meet the Press where he explained to David Gregory what his preparation for the big comedic speech entailed. Meyers joked that sometimes it might be hard to find comedic material, but when Donald Trump is in the news, he “brings it with a bow on it and leaves it at the front door.”

Meyers was excited for the opportunity “to tell jokes that I feel everybody [in Washington D.C.] will get that maybe the rest of the country won’t.” He also told Gregory that his weekly goal on SNL is just to be funny and not necessarily to be influential. Gregory even got in on the fun, joking that he was envious of Meyers for having Sarah Palin on as a guest, something he hopes for one day. Meyers said Palin was a “great sport” when she appeared and suggested most Republicans work great on the show because they are “so happy to be invited to the party.”

One Republican who may or may not be eager to laugh it up on SNL is Trump, who after last night’s verbal beating from Meyers might not be too happy. Meyers continued here, suggesting “If Donald Trump ran for President it would be the greatest thing for us. It would not be good for anybody else, but it would be excellent for us.” On second thought, is Trump likely to turn down any media appearance if offered?