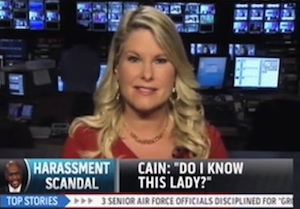 Sharon Bialek spoke with MSNBC’s Thomas Roberts Wednesday about reports in the Chicago Sun-Times that witnesses saw her hugging Herman Cain. “Let me clarify, there were was no hugging involved, there was an arm-elbow,” Bialek claimed. “I simply grasped his elbow and leaned in towards him, and said a few words to him to acknowledge that he knew exactly who I was, and I will not share right now what I said to him.”

Chicago Sun-Times reporter Michael Sneed reported that WIND radio co-host Amy Jacobson, “witnessed the Cain/Bialek encounter a month ago while backstage at the AM 560 WIND sponsored TeaCon meeting in Schaumburg Sept. 30-Oct. 1 at the Renaissance Hotel and Convention Center.”

“I had turned on TV to find out who was Cain’s accuser, and I almost fell over when I saw it was Sharon Bialek accusing Cain of groping her genitals,” Jacobson told Sneed. “I recall Sharon was hell bent on going backstage at the TeaCon convention — where she cornered him. I was surprised to hear she claims she did not know Cain was going to be there. Cain was expected and was late.”

Cain denied ever meeting Bialek during his press conference. “I saw Ms. Allred and her client yesterday in that news conference for the very first time,” Cain said.

Bialek was disappointed in Cain’s denial of his alleged actions during Tuesday’s press conference. “His response disrespected me and millions of other women across the country who are violated in this same way in the workplace,” Bialek told Roberts. “Mr. Cain–you missed a great opportunity of greatness.”

Watch Bialek deny she hugged Herman Cain below via MSNBC: