Sharpton, Lawyer Respond to Stepdad’s ‘Burn This Bitch Down’ Outburst 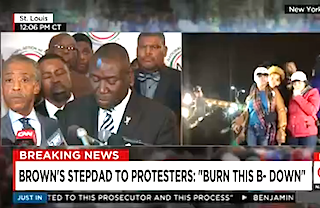 At the very end of their press conference Tuesday afternoon, Michael Brown’s family lawyer Benjamin Crump and Al Sharpton both addressed the controversial outburst from Brown’s stepfather Louis Head, who yelled “Burn this bitch down!” immediately after hearing that Officer Darren Wilson had not been indicted Monday night. Both men condemned that sentiment while at the same time offering their sympathies to a man who was clearly in agony.

Before the reporter could even finish his question about the incident, Crump jumped in with his assessment. “Raw emotion, not appropriate at all, completely inappropriate,” he said. “God forbid your child is killed the way their [child was] killed, and then they get the devastating announcement and the manner it was announced and somebody put a camera in your face, what would be your immediate reaction? So, don’t condemn them for being human.”

“I think it’s a fair question,” Sharpton added. “That’s one of the reasons that all of us are here as civil rights leaders to say there is another way other than to explode and other than to have an outrage like that.”

“After you burn stuff down, then what?” he asked. “That’s not going to get us justice. If you burn down buildings, you achieved what? A fire. But you don’t get justice for Michael Brown.”

“And we condemn the violence and the looting from last night,” Crump said, getting the last word of the press conference. “But we also condemn the violent acts that happened on August 9th that killed Michael Brown, Jr.”

And watch the video of last night’s outburst below, via CNN: