Speaker Boehner: “The State Of Hawaii Has Said President Obama Was Born There. That’s Good Enough For Me” 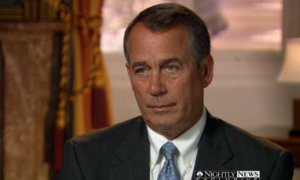 In his first interview since being sworn in as Speaker of the House, John Boehner makes it clear he has no questions about President Obama’s birth, saying “the State of Hawaii has said President Obama was born there. That’s good enough for me.”

In the exclusive interview with NBC’s Brian Williams–set to air tonight on NBC Nightly News–Boehner does not say he’ll tell members of Congress to simply put the matter of the president’s birth aside:

WILLIAMS: I’m curious as to how much responsibility you feel specifically because of something that happened this morning. During the reading of the Constitution, Congressman Frank Pallone of New Jersey was reading a portion of the document, interrupted by someone who heckled from within the chamber. It was to express doubt over the President’s American citizenship. Provided you believe the President is an American citizen, you’ve got 12 members co-sponsoring legislation that does about the same thing, it expresses doubt. Would you be willing to say, “This is a distraction, I’ve looked at it to my satisfaction. Let’s move on.”

BOEHNER: The state of Hawaii has said that President Obama was born there. That’s good enough for me.

WILLIAMS: Would you be willing to say that message to the 12 members in your caucus who seem to either believe otherwise or are willing to express doubt and have co-sponsored legislation?

BOEHNER: Brian, when you come to the Congress of the United States, there are 435 of us. We’re nothing more than a slice of America. People come, regardless of party labels, they come with all kinds of beliefs and ideas. It’s the melting pot of America. It’s not up to me to tell them what to think.

On spending and budget cuts, the Speaker says nothing is off the table, not even defense or homeland security:

WILLIAMS: Do you consider the homeland security budget sacred?

WILLIAMS: Name a program right now that we could do without.

BOEHNER: I don’t think I have one off the top of my head. But there is no part of this government that should be sacred. I believe there’s room, to find savings in the Department of Defense. There are a lot of needs at the Department of Defense. And I think Secretary Gates has a reasonable plan to allow the service chiefs to go in there and root out wasteful spending, so they can find the money that they’re going to need to make sure that we have the weapons of the future.

WILLIAMS: What’s the bare minimum we should expect from our government? You and I. What are the services beyond which you won’t go?