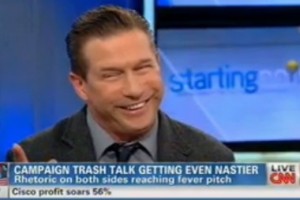 Actor and professional Baldwin Stephen Baldwin appeared on CNN’s Starting Point Thursday morning to discuss Vice President Joe Biden‘s controversial “chains” remark, and made a self-conscious bid for some racially-charged controversy of his own. When host Soledad O’Brien confronted Baldwin with some of his own past provocative remarks, he responded “I call them like I see them,” then proceeded to criticize the President’s health care reform using a pimp metaphor.

The premise of the segment was the ugliness in the current political environment, and was pegged to Biden’s remark, and to the recent shooting at the Family Research Council. An earlier guest was critical of the Southern Poverty Law Center for labeling FRC a “hate group,” calling the designation “irresponsible.”

Baldwin, a conservative activist who blames his political views for his declining acting career, has become practiced at the kind of provocation that can lead to headlines. He told O’Brien, “I know exactly what FRC is. I know the founder of it. And anybody that tries to go in there with a weapon was probably pretty stupid, because those people are…”

When he’s not grinning mischievously and stirring the pot, Baldwin actually makes some sense. He gave a decent critique of the polarized political climate, and a reasonable critique/defense of fellow conservative actor Kirk Cameron. Discussing the shift in attitudes toweard gay marriage, Baldwin said “But at the same time, you have organizations like Family Research Council that say, ok, what about tradition? What about the foundations of what has been the origins and the establishment of this country? It doesn’t mean don’t try to do the right thing. But I believe, you know, listen, Kirk Cameron said something, you know, with Piers Morgan and got in a lot of trouble, and I said during that time, Kirk, it’s not what you say, it’s how you say it. But i supported Kirk Cameron for being able to say and stand up for what he believes in.”

Of course, organizations like FRC are doing more than exercising free speech, they’re also advocating to restrict other people’s rights, but Baldwin is one of the few activists, left or right, who I’ve heard recognize that free speech is a two-way street, that if Kirk Cameron is free to call gay people “destructive to civilization,” then others are free to get angry about that.

That’s also true of Stephen Baldwin’s freedom to tell Soledad O’Brien, in explaining his own prior controversial remarks, that “there was a political move by this president to get health care passed that, in my perception, was criminal.”

Calling the President a criminal? Sound-bite-O-meter ON. Not just any kind of criminal, though, but a criminal “meaning on a common sense level,” which is like being a plumber, but from the standpoint of modern dance. Quirk-O-meter armed.

“You don’t go do a deal behind everybody’s back and work the system and, you know, pimp it out, so to speak, in order to get your way.”

Baldwin clarified his “pimp” remark by saying “he did something and made a move that most people, on a common sense level would say, ‘Was that really the right way to get that done?’ But this president obviously is going to do what he thinks he needs to do to achieve his goals and achieve his agenda.”

Right, just like a pimp! Or maybe Xzibit? Did the President put a TV in the Affordable Care Act’s headrest?

As if all of that wasn’t weird enough, Baldwin then humbly told the story of how he assisted a woman who was having a seizure at the Peninsula Hotel, but refused to take credit for saving her life.

The fact that Stephen Baldwin so badly wants me to be outraged by this makes me really not want to be outraged about it. He’s just a goof trying to get attention, and you know what? The guy was in The Usual Suspects, so maybe he deserves some. Let’s get him an acting job, so he can put his skills to good use.