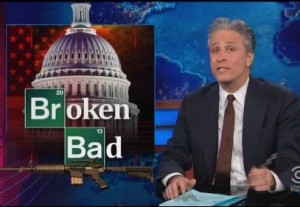 Jon Stewart admitted tonight he was full of disdain for Republicans for their strident opposition . He borrowed a phrase to describe the GOP as “cunt-punters,” saying that they are “killing my soul” and engaging in a “cynical exercise in disingenuous debate.”

After his dismay at seeing the Senate rejecting almost every single gun amendment, Stewart asked, “Did these c*nt-punters… pass anything of substance?” And the Senate did: it voted to restrict publication of where gun owners live. Stewart observed that the only amendment they successfully limited was the first one.

Stewart took on Republican arguments ranging from why not go after video games to Ted Cruz saying “it would put us on that path” to a national government registry. Stewart deconstructed this “cynical exercise in disingenuous debate” and summed up the GOP’s main objection as basically that “there’s really no point in making laws because criminals are just going to end up breaking them”

However, while Stewart would have been okay with just a simple disagreement on gun control, he found a hypocrisy in the GOP trying to limit what can be done to protect American’s gun rights while fighting to give the government every tool possible to combat terrorism. He concluded, “We move heaven and earth to do whatever it takes to prevent weapons to fall into the hands of foreigners who would kill our citizens, because apparently we think killing our citizens is our job.”