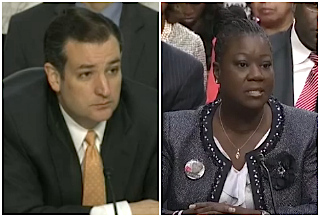 Sybrina Fulton, the mother of Trayvon Martin, who was shot and killed by George Zimmerman in early 2012, appeared on Capitol Hill Tuesday for a hearing regarding the controversial “Stand Your Ground” laws. When it came time for Sen. Ted Cruz (R-TX) to speak at the hearing, he informed the still-grieving mother that Stand Your Ground laws actually benefit African-Americans as much as, if not more than, they do whites.

Cruz began by offering his condolences for Fulton’s loss, but quickly moved on to defend the trial by jury process that found Zimmerman not guilty of murder. He also noted, correctly, that the “subject of this hearing, the Stand Your Ground laws, was not a defense that Mr. Zimmerman raised. So this entire hearing–the topic of this hearing–is not the issue on which that trial turned.” Though Zimmerman’s defense team did not end up using Stand Your Ground, it did come out during the trial that Zimmerman was likely aware of the law’s protections when he shot Martin.

“We know that some in our political process have a desire to exploit that tragic, violent incident for agendas that have nothing to do with that young man who lost his life,” Cruz continued. “We have seen efforts to undermine the verdict of the jury and, more broadly, to inflame racial tensions that I think are sad and irresponsible.”

Then, Cruz got to one of his primary points, which concerned that effect of Stand Your Ground laws on African-American communities. He rejected the notion, put forward earlier in the hearing that “no one could reasonably believe that Stand Your Ground laws protect those in the African-American communities who are victims of violent crimes.” He found that idea particularly remarkable since “a great many African-Americans find themselves victims of violent crime and have asserted this defense to defend themselves, defend their families, defend their children.”

Cruz also cited the fact that “in 2004 a state senator in Illinois by the name of Barack Obama co-sponsored an expansion of Illinois’ law providing civil immunity for those who use justifiable force to defend themselves” as evidence that similar laws could not possibly be racially biased. “The notion that stand your ground laws are some form of veiled racism may be a convenient political attack,” he said, “but it is not borne out by the facts remotely.”