Televangelist Pat Robertson Would Get Behind a Trump-Kasich Ticket
video

Televangelist Pat Robertson Would Get Behind a Trump-Kasich Ticket 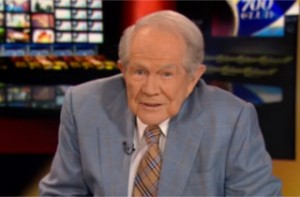 Televangelist and host of The 700 Club Pat Robertson said some words of mourning for the state of the GOP primary while resolving to back his new dream ticket: Donald Trump and John Kasich.

The GOP frontrunner “ought to team up with John Kasich and run as a team,” he said. “If he wants to have a quote ‘politician’ to get things done, Kasich is the man to make it happen.”

Robertson said that Trump’s success was due in part to Democrats taking advantage of open primaries to vote for him. But since Trump was all but guaranteed the nomination (which “astounds me,” Roberston said), it was necessary to pair him with a pragmatist who could put Republican policy into praxis. Kasich, he argued, was “someone who really knows how to make government work, who really knows the budget cold, who really can deal with these arcane policies. Kasich’s the man.”

He added a pithy eulogy for the flagging campaign of Sen. Marco Rubio, whom he described as an “extraordinarily able person,” albeit one who had been “hammered” in the debates and “had like a meltdown” from which he had not recovered. He had shown such promise, Robertson mused, “and all of a sudden he began to say funny things in these debates.”

The host also dismissed the runner-up, Ted Cruz, despite the fact that Robertson’s brand of evangelism is more aligned with the Texas senator’s extreme Christian Right orthodoxy than it is with either Trump’s crude secular materialism or the more centrist tack the conservative Kasich has taken recently on social issues like gay marriage. Cruz’s ideological purity, he suggested, may have cost him since the candidate “can’t, seemingly, get anything much past the evangelicals” in the way of support.

“That leaves Kasich and Trump,” he said.