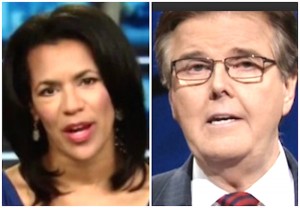 Enough of these calls for Fredricka Whitfield to be fired. Enough of the letters to CNN President Jeff Zucker demanding he do so, like the one we’re seeing from Texas Lt. Governor Dan Patrick (no relation to the former ESPN anchor).

As noted in this space Sunday, she made a mistake. A doozy. But there was no intent behind those words. Anyone with internet access can see she has no pattern of being anti-cop or really anti-anything. Whitfield is a quintessential news anchor from the old days of CNN: Plays it straight, offers few opinions and invariably only that happens in obvious situations, and has carried herself well for 20 years on a national level.

Anyone trying to turn this into a conservative/liberal/pro-cop/anti-cop story should not only get their head examined but see a chiropractor for desperately twisting the narrative beyond logic. Because if you think Whitfield would throw her entire career away by supporting someone insane enough to open fire on a police station, you either haven’t been paying attention or simply looking for an easy scapegoat.

Stating the gunman in a off-prompter moment during Q & A with a guest that the gunman was “very brave and courageous” is a textbook example of the wrong choice of words at the wrong time. It happens in live television in varying degrees all the time…and in a world of media internet publications (like Mediaite) and social media as a courier to the masses, no major mistake goes unreported. CNN handled it from a damage control perspective like a JV team from there, allowing social media to blow up the story during a relatively slow news weekend when a simple apology after one of the many breaks during the same telecast would have snuffed out the fire before spreading.

Whitfield did herself no favors, of course, by offering up do-I-seriously-have-to-even-address-this? explanation on Sunday that didn’t include an actual apology, which as noted here at the time would only make the situation worse (it did). But when she finally did apologize on Monday, that should have been the end of it…until it wasn’t.

Police as a whole have been made out to be the bogeymen recently by some of their local leaders, civil rights activists, attorney generals on both the state and national level, and by a considerable chunk of the media. They’re feeling unappreciated, defensive, downright angry. We see what happens in places like Baltimore when morale plummets and cops are told to do their jobs with one hand tied behind their backs: Murder rates–particularly in poor neighborhoods–skyrocket to their highest levels in 40 years. Nobody is safe.

Those who lead police unions and departments want someone to lash out against. They want a scapegoat for being treated and portrayed as poorly as they have over the past year since Ferguson. That’s understandable.

But that target shouldn’t be Fredricka Whitfield, who simply said the wrong thing and the wrong time…without any malicious intent if her history is any indication.