The View‘s Raven-Symoné: I Discriminate Against ‘Ghetto’ Names Like ‘Watermelondrea’ 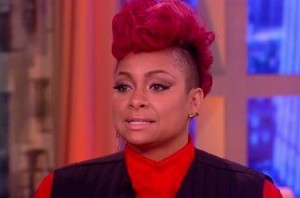 During a segment on a new study finding that people discriminate against others based on their names, The View co-host Raven-Symoné said she wouldn’t hire someone with a “ghetto” name.

Raven-Symoné made the comments Thursday after the show played video of a popular YouTube video making fun of inner city African-American names. “Just to bring it back, can we take back ‘racist’ and say ‘discriminatory’? Because I think that’s a better word. And I am very discriminatory against words like the ones that they were saying in those names,” she said.

Unsurprisingly, other African-Americans did not take the comments well:

Raven-Symoné name hits for the hood name cycle. It has two capital letters, a hyphen, alternative spelling choice, and an unnecessary accent

Don’t let Raven’s simple minded opinion discourage you! If you have the knowledge it won’t go unnoticed no matter what your name is! — Jonica Booth (@Blu1x) October 9, 2015

That Raven-Symoné used “Watermelonisha” as an example of a “black name” shows you how deep the internalized racism and self-hatred goes.