This Exists: Man Robs $1 From Bank Only To Receive Prison Health Care 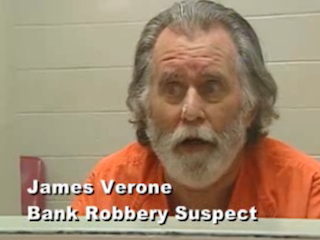 Well, this story is like a wacky screwball comedy! Only less so because it’s actually really depressing. North Carolina man James Verone considers himself “a logical person,” so when the 59 year old developed some troubling medical problems including a growth in his chest and had no medical insurance, he decided on the best way to get help: he robbed a bank. Not wanting to cause any more than the requisite amount of trouble though, he only stole $1.

Colorado’s 9 News has the incredible story:

“Verone says he came to the decision to rob the RBC Bank on Thursday of last week. He had no gun but handed the teller a rather unusual note.

‘The note said this is a bank robbery. please only give me one dollar,’ Verone said.

Then he did the strangest thing of all.

‘I started to walk away from the teller then I went back and said, ‘I’ll be sitting right over there in the chair waiting for the police,’ he said.”

And don’t think Verone did this without giving it some thought. He knows how much time he’s looking to get (he’s thinking about three years) and he knows what he wants to do when he gets out (he’ll be old enough for social security and wants to get a Myrtle Beach condo). The only problem is, he may not have gamed the system as well as he thought. Since he didn’t bring a gun with him, the police have only charged him with larceny, not bank robbery. Therefore, he may not get the jail time he wants.

So, is Verone a clever hero who should be celebrated for his courage or a lazy thief stealing from taxpayers? I don’t know, but I’m pretty sure Jim Carrey will play him in the eventual movie.

Watch a news report from 9 News below: