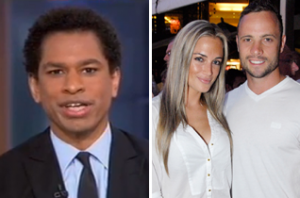 Touré used his closing monologue on Friday’s episode of The Cycle to analogize the Oscar Pistorius–Reeva Steenkamp murder case as “our gun debate writ small.” The anchor drew parallels between what allegedly transpired on a micro level between the two lovers to what is happening on a macro level nationwide.

Pistorius claims to have kept a gun at home out of fear of a home invasion and accidentally shot his girlfriend through a door, mistaking her for an intruder. “The gun rights community rests much of their argument on ‘what should we do when an armed criminal busts in?'” Touré explained. “The NRA’s campaign of disinformation has successfully spread many lies and myths, but sober scientific studies of crime data show guns can help citizens protect themselves against criminals, but not without massive risk to those who live near that gun every day.”

He went on to outline data that suggests that the likelihood of having to use a gun against a criminal is “once in a lifetime,” whereas what happened to Pistorius and Steenkamp “is the far more likely outcome.” Touré specifically cited a New England Journal of Medicine study that found that guns in the home are “43 times more likely to kill a family member, friend or acquaintance than an intruder.”

Turning NRA executive Wayne LaPierre‘s words on their head, as he’s done before, Touré asked, “What stops a good guy with a gun who is angry at a good guy he’s friends with, or angry at a woman he loves?”

Bringing it back to Pistorius, he said, “Reeva was killed, either because of a domestic violence argument or a tragic accident by a gun, but killed by a gun meant for protection from criminals who never came.” He concluded, “We are seized by the myth that we need guns to save us from criminals and that guns make us safer, but the data shows guns make us less safe. We must as a nation ask ourselves questions that are based in reality and not draped in NRA fear-mongering.”