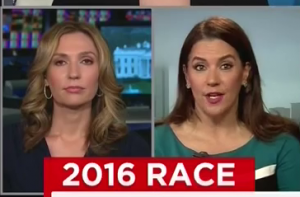 A CNN debate between a Donald Trump supporter and former Ted Cruz communications director Amanda Carpenter went off the rails Friday when the Trump supporter suddenly accused Carpenter of having an illicit affair with her former boss.

CNN’s Kate Bolduan was hosting a segment on the feud between Trump and Ted Cruz. “Are you ready for Trump to move on?” she asked Boston Herald columnist Adriana Cohen.

“Oh, absolutely I think we should move on,” she responded. “Where we should move to is The National Enquirer story that has reported that has Ted Cruz has had affairs with five mistresses, including you’ve been named as well, Amanda.”

“I don’t think that’s ‘moving on’ at all, Adriana,” an exasperated Bolduan interrupted.

“If we’re going call Donald Trump’s character into question, I would like Ted Cruz to issue a statement whether or not the National Enquirer story is true, that he has had affairs with many women, including you were named, Amanda,” Cohen repeated. “Will you denounce this story or will you confirm it?”

Bolduan stepped in to make it clear that CNN wasn’t supporting the Enquirer report. “It will come as no surprise to our viewers, CNN has no reporting on what you’re talking about coming from from The National Enquirer,” she deadpanned.

Carpenter kept her composure pretty well, considering the circumstances. “What’s out there is tabloid trash. If someone wants to comment on it, they can talk to my lawyer,” she responded.

“It’s categorically false,” she continued angrily. “You should be ashamed for spreading this smut. Donald Trump supporters should be held to account for it.”

“I will not be intimidated,” Carpenter shot back. “I will continue to make my thoughts known about Donald Trump. I’m not backing down.”