Wait, What? Pat Buchanan Refers To Obama As ‘Your Boy’ To Al Sharpton 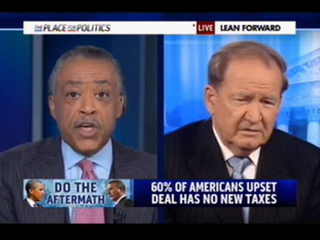 Pitting newly minted host Al Sharpton against longtime conservative firebrand Pat Buchanan was bound to generate a potent shouting match, no matter what the topic. But given Buchanan’s record of questionable comments, it’s hard not to find something off-color about his debate with Sharpton today, where, discussing the debt, he argues that “your boy,” President Obama, was “whipped” by Sen. Mitch McConnell, and adds a “briar patch” reference for good measure.

The debate centers around who got the post around the debt deal, and both predictably argued that their side decimated the other. That said, Sharpton noted that the narrative going into 2012 was far more favorable to the Tea Party thanks to the deal: “not only did they they did get all they wanted, they set up a narrative now for the 2012 election where it will be around tax cuts.” Buchanan responded facetiously, “please don’t throw me under the briar patch!” a saying typically meant to indicate reverse psychology that happens to come from the same “Uncle Remus and Legends of the Old Plantation” fable that gave us the term “tar baby” (“Br’er Rabbit,” it should be noted, seems to be having some sort of resurgence today).

That would’ve been enough to raise some eyebrows from Buchanan, but Sharpton didn’t really seem to take offense until Buchanan referred to President Obama as “your boy,” which seemed to stun the host. “My what?” he asked. “My President, Barack Obama? What did you say?” “He’s your boy in the ring,” Buchanan corrected, which Sharpton immediately shot down. “He’s nobody’s boy– he’s your president, he’s our president, and that’s what ya’ll don’t get through your head.” Sharpton then returned to the topic at hand, suggesting that the President was “rope-a-doping” Republicans by making them punch themselves out on this issue.

Buchanan didn’t buy it, and had one more questionable comment in the quiver: “if he gets whipped by Mitch McConnell, how is he going to beat Mitt Romney?” Sharpton didn’t forgive the “boy,” comment, however, ending the interview by telling Buchanan to “take care of your Tea Party boys.”

There was nothing overtly racial about the dialogue– certainly, it didn’t come up by name– and even following up what could very well have been a perfectly legitimate reference to the “Br’er Rabbit” legend with calling the President “boy” could be forgiven. But the accented way Buchanan pronounced “boy” seemed to set Sharpton off, likely not the least because it came from a pundit who in recent memory has given Anders Breivik‘s xenophobia the benefit of the doubt, stood up for Rick Santorum‘s racially-tinged comments, and wrote an entire book on how America is being “lost” by the white majority, long before “take back America” was a Tea Party slogan. That’s not to say there isn’t anything to parse through in Sharpton’s words– he did say, somewhat poignantly, that he expected to see a “white towel thrown in at any minute,” but if that, indeed, was part of the racial subtext, that white is the standard color of surrender is a far better cover than calling a President “boy” could hope to have.

Should Sharpton have been so insulted by Buchanan calling the President “boy,” or is he warranted the benefit of the doubt here? Watch the debate via MSNBC below: