Who Knew? CNN’s Wolf Blitzer Has Fans In North Korea: “They Watch. They Watch A Lot” 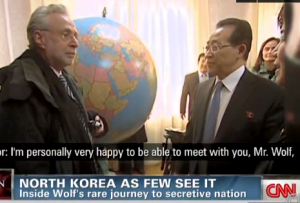 CNN’s Wolf Blitzer, who recently spent six days in North Korea, will share his experiences inside one of the most secretive societies on Earth in a documentary airing on CNN Saturday. We caught up with Blitzer to talk about the North Korea trip and were surprised to learn the host of Situation Room has a hard-core group of fans among the political and military elite in North Korea. “They watch. They watch a lot,” Blitzer told Mediaite.

CNN–along with a French and a German television network–is available to a small segment of the population in the North, as became clear to Blitzer when a senior foreign ministry official, Kim Kye Gwan, greeted him as “Mr. Wolf,” and joked that Blitzer had “the same power as the American president.” Blitzer said Kim joked that both men had situation rooms. “I was impressed he knew about the Situation Room.”

Blitzer said the elites asked all kinds of questions–about the Obama White House and Washington politics–but also about cable news folks. “One North Korean official said ‘What happened to Christiane? We don’t see her on CNN anymore,” referring to Christiane Amanpour. “I said, ‘she went to ABC.’ and he said ‘Why would she do that?'” A bizarre and revealing moment for Blitzer that underscored just how much time officials in the highest levels of the North Korean leadership watch CNN. “Who would’ve thought?”

Viewers who watch the documentary this weekend will see more evidence of the North’s focus on the West, and the U.S. in particular, from students at Kim-il Sung University who speak perfect American English–and students at an elite high school learning the language and getting help with the accent by listening to the music of Kenny Rogers.