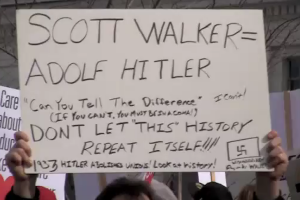 As the old saying goes, every group has a few bad apples. As the slightly newer saying goes, When those apples are bad enough, make sure you send someone out with a digital camera to take pictures. Wisconsin Republicans have taken this to heart by producing a YouTube video featuring some of the nastiest signs from the protests over Governor Scott Walker’s budget cuts. The video intercuts these images with snippets of different high profile Democrats and Liberals accusing Conservatives of using violent rhetoric. It mixes them up into a potent stew of “us versus them” mentality.

The video is certainly successful at what it’s trying to do. It takes a complicated situation and very successfully positions is as a Right/Left issue. What does Bill Maher have to do with teachers’ pay? Nothing, but there are a whole lot more people who would like to see him look like a hypocritical fool than there are those that really care about the Wisconsin educational system. This isn’t just about unions, the video says, this is about every snooty Liberal who’s ever pissed you off on TV. Join us and we’ll show them what for!

Whether you think that’s a fair message or not is irrelevant. The video is incredibly effective.

Side note: Are there really still people out there who are slapping a picture of Adolf Hitler on a sign and saying, “Yep, this is a good idea! This won’t make me look ridiculous at all!” Comparing Walker (or Obama…or Bush…or Bieber…or whomever) to a Nazi isn’t just reductive, it’s also he hoariest of cliches.

Watch the video below and, since there are also good apples out there, and because you’ll probably have a bad taste in your mouth, you can then check out this list of some of the goofiest signs out there. Really, I’m amazed how many people thought the name Walker and instantly connected it was Star Wars.