With The Pitch, It Looks Like AMC Has Finally Gotten People To Watch Hour-Long Commercials! 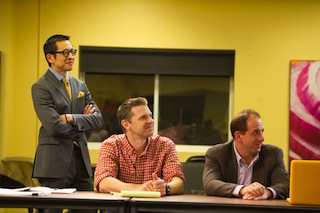 The television world is facing a problem; with the prevalence of DVRs, people have figured out how to skip commercials. Obviously, as the television is a device purely designed to let people know what products they should buy (as well as occasionally tell stories about wacky roommates), something needs to be done. That’s why we’ve entered the golden age of product integration. If audiences aren’t watching ads, then the ads will come to them. American Idol judges will constantly hold their favorite soft drinks, Top Chef contestants will cook full meals using only ingredients from Target, and the millionaires from Undercover Boss will give an empathetic face to tons of soulless, inhuman corporations. However, wouldn’t it be great if TV networks could come up with a way to trick audiences into literally watching hour-long commercials? Well, it looks like AMC has finally figured out a way thanks to their new “show,” The Pitch!

AMC, which appears to be actively trying to get rid of that nasty “television for smart people” reputation they developed thanks to Mad Men and Breaking Bad, is premiering the new reality series The Pitch (which, surprise surprise, comes from the people who made Undercover Boss) tonight. The series is a competition show in which different ad agencies compete to win a corporate client. In other words, this is a show in which people compete to see who can compliment a brand name better.

Apparently under the belief that anyone who watches Mad Men just watches it because they love ad agencies instead of, y’know, for the 60s period, brilliant writing, and unparalleled acting, AMC forced the viewers of last night’s episode to sit through an extended preview of The Pitch‘s premiere in which company’s vie for the affections of the Subway fast food chain.

With only two minutes of footage spread over Mad Men‘s commercial breaks, you’d think AMC would want to focus on what the official website describes as “a cut-throat, winner-takes-all showdown.” But no. Last night’s special preview instead focussed on what I can only assume is the show’s real focus: loving, slow motion shots of Subway’s glorious logo.

Here, take a look! And keep in mind that the following clips are taken from literally only two minutes of screen time:

Look, I don’t want to sound too negative. Whoever came up with this show is an absolute genius. I mean, it’s like a TV executive’s wet dream. It’s a reality series so it costs nothing and its very structure requires a new product integration deal every single week! You couldn’t make the bean counters happier if you were producing a show called Who Wants to be a Millionaire and then Send a Signed Check for a Million Dollars to AMC Headquarters?

So, if anyone wants to check out the premiere tonight, please enjoy the future of television. And, if you really want to have fun, play a drinking game where you take a shot every time you see the Subway logo. If you’re still alive at the end, you can leave a comment on this post.

Honestly, I don’t expect I’ll have to respond to that many…