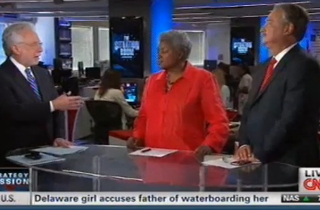 Thursday afternoon on CNN, Wolf Blitzer had on veteran Democratic strategist Donna Brazile and Republican strategist Alex Castellanos to discuss the respective pro- Barack Obama and Mitt Romney Super PAC ads that Blitzer qualified as “misleading if not entirely false”: the pro-Obama ad that suggests a woman’s death was Romney’s fault; and the pro-Romney ad that suggests the president has sought to undo welfare reform.

Blitzer played brief clips of the two ads and then asked his guests whether these “totally wrong” ads will be effective in energizing the left and right voting bases. Castellanos posited that the Priorities USA ad likely energized the Obama base, but because Romney needs to try harder to reach independents, he will likely be hurt more by misleading ads than the president. Castellanos also argued that the pro-Romney welfare reform ad was not false, which led Blitzer and Brazile to challenge him on the particulars of Obama’s welfare state-waiver policy.

Brazile then said “the Republicans have a way of trying to paint every Democrat, including those who are moderate or pragmatic, as somehow this ‘liberal’ that is trying to send a check to people who are not working. We know that there are misleading ads out there.”

Blitzer pressed her to defend the Priorities USA ad: “Is this pro-Obama Super PAC ad, which effectively accuses Mitt Romney, at least indirectly, of seeing this woman die and it’s an outrageous ad, is that going to be counterproductive to the Obama campaign? Or will it help the obama campaign by raising more money from the hardcore left?”

“I’m sure because I’m not involved in any campaign,” began Brazile’s dodgy response, “but I’m sure the Obama campaign is not coordinating with their Super PAC, okay?”

“I’m asking, will this help the campaign or hurt?” Blitzer challenged.

“That’s all fair,” Blitzer pushed back, “but it’s not fair to suggest that the woman died because of Mitt Romney.”

“And that’s the big difference here between these two ads,” Castellanos interjected. “One of them we’re interpreting the law […] but now O.J. Simpson can stop looking for the real killer, according to team Obama, because it turns out it was Mitt Romney all along. And that’s going over the line.”

Brazile responded that many Republican Super PAC ads have been “nasty, destructive, misleading,” which prompted Castellanos to demand her to answer “Do you think Mitt Romney was responsible for this woman’s death?”

“Look, I haven’t seen the ad,” Brazile shot back, “I’m sure he was not responsible.”

To close the segment, Blitzer told Brazile: “We’re going to show you that ad. You’ll see it, study it, get the impression that most people get when they see that impression, which is a false impression.”

“I’ve been on cable blackout all day dealing with some other issues,” Brazile defended herself.

“It’s been out for a couple days,” Blitzer said. “But we’re going to show it to you.”