A North Carolina woman was shocked to discover a Nazi swastika drawn on the underside of her McDonald’s chicken sandwich bun in what everyone involved is hoping was “butter.”

Charleigh Matice of Morehead City, North Carolina, whose grandfather fought in World War II snapped a photo of the offending symbol on her meal, asking later, “Is this a joke? Does somebody really think they’re funny?” 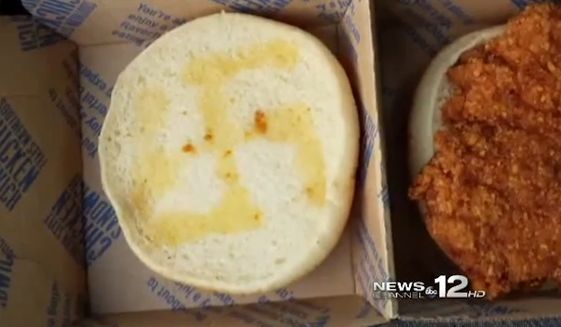 Dulcy Purcell, the owner and operator of the local McDonald’s restaurant released the following statement, confirming that the employee responsible has been fired:

“We are very sorry for the service that our customers received, and to be clear we have terminated the employee who was involved. We do not tolerate that kind of behavior at McDonald’s, and it’s not what we stand for personally as owners. It is about providing the best level of service and care to our customers, and anything less than that is unacceptable to us.”

The incident has not turned Matice off of McDonald’s altogether, telling North Carolina’s ABC affiliate that she plans to keep eating there in the future.

Watch video below, via WCTI-TV: