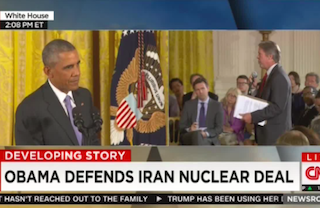 In the aftermath of the Obama Adminstration’s nuclear deal with Iran, at least three Americans, including Washington Post correspondent Jason Rezaian, remain imprisoned in that country against their will. When this fact came up during a White House press conference on Wednesday, President Barack Obama appeared to take great offense at the suggestion that he is “content” with the outcome of the deal even though it does not guarantee those Americans’ release.

“As you well know, there are four Americans in Iran, three held on trumped-up charges according to your administration and one, whereabouts unknown,” CBS News’ Major Garrett said when it was his turn to ask the president a question. “Can you tell the country, sir, why you are content with all the fanfare around this deal to leave the conscience of this nation, the strength of this nation unaccounted for in relation to these four Americans?”

“I’ve got to give you credit Major for how you craft those questions,” Obama said in response. “The notion that I’m content as I celebrate with American citizens languishing in Iranian jails,” he added, taking a pause. “Major, that’s nonsense, and you should know better.”

“Nobody is content, and our diplomats and our teams are working diligently to try to get them out,” Obama said. “Now, if the question is why we did not tie the negotiations to their release, think about the logic that that creates. Suddenly Iran realizes, ‘You know what? Maybe we can get additional concessions out of the Americans by holding these individuals.’

“And, by the way, if we had walked away from the nuclear deal, we’d still be pushing them just as hard to get these folks out,” the president added. “That’s why those issues are not connected, but we are working every single day to try to get them out and won’t stop until they are out and rejoined with their families.”

Earlier this year, Obama called on Iran to release the Americans, saying, “At this time of renewal, compassion, and understanding, I reiterate my commitment to bringing our citizens home and call on the government of the Islamic Republic of Iran to immediately release Saeed Abedini, Amir Hekmati and Jason Rezaian.”