Bill Maher: If You Celebrated Bin Laden’s Death, You’re Not Really A Christian 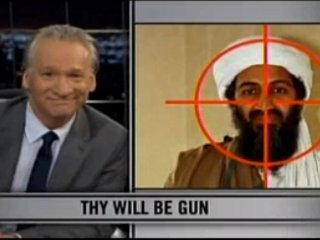 Reaction to Osama bin Laden’s death was overwhelmingly not just positive, but gleeful – and let’s face it, it’s not tough to see why. Bill Maher, though, tonight pointed out on Real Time that Christians who celebrate the death of even someone as evil as bin Laden are disobeying the part of their faith that instructs them to love their enemies – and, being Bill Maher, delighted in saying so.

It wasn’t so much a Christianity-bashing session as it was Maher bashing what he saw as hypocrisy with lines like, “Capping thine enemy is not exactly what Jesus would do – it’s what Suge Knight would do,” and “Martin Luther King gets to call himself a Christian because he actually practiced loving his enemies, and Gandhi was so fucking Christian he was Hindu” (okay, that last one bashed Christianity a bit).

Maher pointed out that “non-violence was kind of Jesus’s trademark,” and couldn’t reconcile it with the factoid that “more evangelical Christians than any other religion” support torture (for the record, these seem to be the numbers Maher was talking about, but that same link also says, “[P]arty and ideology are much better predictors of views on torture than are religion and most other demographic factors”).

And Maher didn’t absolve our black ninja gangster president from his criticism, either: he said he, like so many others, was “missing the message” on the non-violent teachings of Christianity. Then again, Maher also once went on record thinking Obama’s not really Christian. And while Maher made it clear he doesn’t have any personal problem with celebrating bin Laden’s demise:

…he’s also not conflicted. Why not? “[B]ecause I’m a non-Christian…just like most Christians.” This was much closer to Maher at his best than when he just goes after religions in general – the specific focus on the hypocrisy angle made it reminiscent of The Daily Show with more cursing…and we’re fine with that. Video below, via HBO.