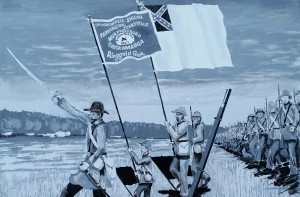 The California Department of Food and Agriculture banned a retired teacher from displaying his painting of a Civil War battle during the Fresno County Fair because it contains the Confederate Flag.

Timothy Desmond‘s painting The Attack portrays the Siege of Atlanta in the final years of the war. Accordingly, it depicts Confederate soldiers waving one of the Confederate battle flags as they attack. Desmond submitted the work to the County Fair, where it could be judged and considered for a prize.

However, he soon got a phone call from state officials. They could still judge the painting in the contest, they explained, but state law prevented them from showing the painting at the fair.

California Government Code § 8195 provides that “The State of California may not sell or display the Battle Flag of the Confederacy… or any similar image, or tangible personal property, inscribed with such an image unless the image appears in a book, digital medium, or state museum that serves an educational or historical purpose.” This law, they argue, prevents them from showing the painting.

Desmond disagreed and enlisted the help of The Center for Individual Rights to sue on his behalf, arguing that the enforcement of the provision in this case violated the First Amendment. Under existing Supreme Court precedent, the government generally has the right to control what messages appear in state-run limited forums, but only when those restrictions are “reasonable.”

“As applied to the display of privately-created art at a county fair, Section 8195 is not a reasonable regulation,” CIR writes in its lawsuit. “It has nothing whatsoever to do with the quality of the art, the size of the artwork, or its ability to be displayed. In these respects, The Attack is no different from any other artwork that could be displayed at the Fresno Fair.”