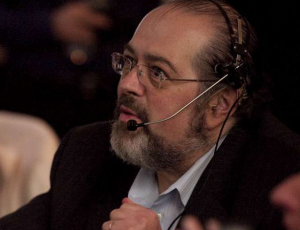 The man behind some of CNN’s most noteworthy innovations, including the “magic wall” that John King used to great effect during election coverage has been promoted to “chief innovation officer” at the network. David Bohrman, who has been CNN’s Washington bureau chief and head of special events, will assume his new role in May. Known inside CNN as a master of new technology–like the wall and the Jessica Yellin “hologram liveshot”–Bohrman will be tasked with bringing innovation and new technology to all of CNN’s platforms.

“We are giving his passion for what is new and next in emerging technology a bigger canvas,” said Jim Walton, president of CNN worldwide.

David Bohrman, CNN’s DC Bureau Chief and head of special events, will assume a new role within our organization in the coming weeks. On May 1, David will become the senior vice president and chief innovation officer for CNN Worldwide, reporting directly to me. As the executive producer of CNN’s election coverage over the last nine years, David has integrated technology with our news reporting to change the face of our coverage and further demonstrate CNN’s commitment to innovation. We need only think of the CNN/YouTube debates, the “magic wall”, and our anchoring from the convention floors to be reminded of his leadership in this area. We are giving his passion for what is new and next in emerging technology a bigger canvas. He will continue to contribute to the creation of formats and editorial approaches, but now across CNN’s multiple platforms. Ken and Mark will lead the search for David’s replacement as DC Bureau Chief; our plan is to fill that role as soon as possible. We look forward to seeing David’s creative expertise at work across the CNN landscape. Please join me in congratulating him on this new assignment.