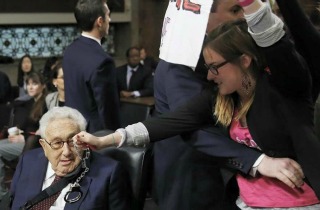 Yesterday a group of Code Pink protesters interrupted a Senate hearing where Henry Kissinger was set to testify. They got close up to Kissinger and called for him to be arrested for war crimes. The protesters were escorted out of the chamber, but not before Senator John McCain said, “Get out of here, you low-life scum.”

Code Pink president Medea Benjamin responded in a blog post on their website today, telling McCain that he should be more worried about the kind of physical intimidation that Kissinger overlooked during his time as Secretary of State. And, she says, they aren’t nearly as “despicable” as Kissinger and the other U.S. officials who were involved in the Indonesian invasion of East Timor and the elongation of the war in Vietnam.

Benjamin concludes with this message to McCain:

“What is really disgraceful is the Senate calling in a tired old war criminal to testify about ‘Global Challenges and the U.S. National Security Strategy.’ After horribly tragic failed wars, not just in Vietnam but over the last decade in Iraq and Afghanistan, it’s time for the US leaders like John McCain to bring in fresh faces and fresh ideas. We owe it to the next generation that will be cleaning up the bloody legacy left behind by Kissinger for years to come.”

Code Pink also held an AMA on Reddit (still ongoing as of this posting) to expand upon their reasoning and answer some tough questions about their rather showy method of protest: 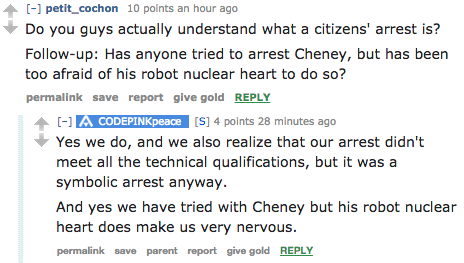 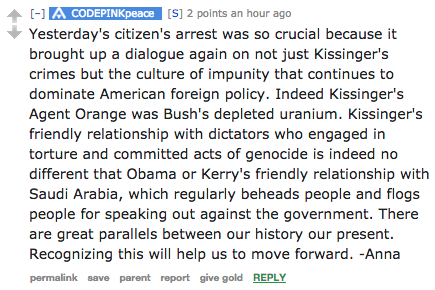 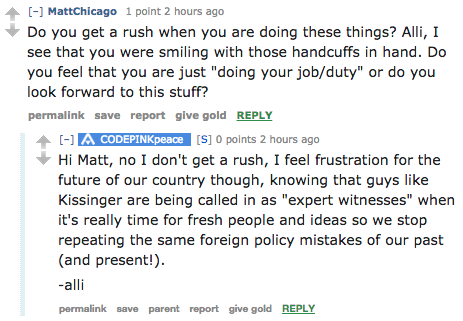 You can watch the video below, via Fox News: