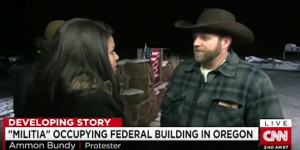 For four days, an armed, self-proclaimed “militia” has been occupying a federally-owned wildlife refuge in Oregon. They have been doing this in response to a verdict handed down against two ranchers in the area who were accused of arson and turned themselves in at a nearby prison yesterday.

Understandably, as the members have released videos and placed armed guards in towers to oversee everyone who approached their new stronghold, media interest in the event has been high. Many outlets have been evoking other recent protests to draw comparisons between the “Citizens for Constitutional Freedom” and other movements like Black Lives Matter.

The militiamen have taken notice of these comparisons, but they aren’t thrilled about some of the conclusions that are being drawn. Specifically, they are upset about what they perceive to be the injustice of the way their group is represented in the media compared to BLM.

Speaking to the Huffington Post on Monday and using the pseudonym “Fluffy Unicorn,” one of the protestors lamented, “The Black Lives Matter movement, they can go and protest, close freeways down and all that stuff, and they don’t get any backlash, not on the level that we’re getting.”

Unicorn, whose militia is led by the son of Cliven Bundy, went on to say that the media should be harder on BLM and easier on the Citizens for Constitutional Freedom because “their level of protesting is different.” To illustrate this, he claimed that the CCF weren’t obstructing schools, although it should be noted that a school district in Oregon has canceled classes as a result of the occupation.

Responses to Black Lives Matter protests have received similar levels of ire from the public and, some argue, even more urgent response from authorities. While #YeeHawd and #YallQaeda trended relentlessly on Twitter when the mob first took the refuge, the White House has remained distanced from the situation and the only meaningful action taken by police involved the sheriff telling the mob to “go home.” In contrast, Black Lives Matter protesters are routinely met with militarized police forces and urgent, pre-emptive legislative action against their protests. Mocking hashtags and militarized police are both negative reactions, though they exist on two separate planes of severity.

Militia leader Ammon Bundy approached comparisons to BLM with a more nuanced take than Unicorn, admitting he wasn’t too familiar with the movement, but “[he does] agree with them standing up for what they believe in.”