The Latest Anti-Pot Buzzkill: Miss Universe Takes A Stand Against Marijuana On O’Reilly 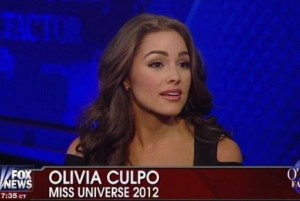 If you weren’t sure about your position on legalizing marijuana and were waiting for the words of Miss Universe to finally convince you, good news! Miss USA Olivia Culpo, the newest Miss America, stopped by the O’Reilly Factor tonight to talk to Bill O’Reilly about why she opposes legalizing marijuana. Now less you think this is being done for any political reasons, keep in mind she is supposed to be a role model and set a good example and drugs are bad, m’kay?

RELATED: President Obama Responds To Question About Legalizing Marijuana… And His Own Past Drug Use

The whole segment was an exercise in who could be a bigger buzzkill: O’Reilly or Culpo. O’Reilly brought up a new pot shop in Denver that opened on New Year’s Eve and asked Culpo if she would ever go there. She said she would never want to go any place where marijuana is legalized, saying that the mere act of legalization sends a message to young people that, amazingly enough, it might not be the evil drug so many make it out to be.

O’Reilly bragged that he’s never smoked pot in his life, though he did know people who did. Culpo clarified that she thinks medicinal marijuana is a good idea, but when pressed by O’Reilly to explain why she opposes fully legalized pot, she said that people react differently to marijuana, while warning that “there’s so much that we don’t know.” But mostly, she was concerned about the message it sends to young people.

Culpo and O’Reilly both claimed to have personally witnessed marijuana having a negative effect on people’s lives. O’Reilly said he stayed far away from drugs and alcohol because he saw how it ruined others. Culpo optimistically said the people who smoke pot the most often would actually agree with her description of its effects on the human body, which led O’Reilly to go into a mini-rant of sorts on Willie Nelson and Snoop Dogg.

Culpo may even make a campaign of her anti-marijuana position, and personally hopes it will never be legalized nationally. She particularly emphasized to O’Reilly that she doesn’t get drunk, because again, she is a role model and like most 20-year-olds, has a great deal of respect for the drinking age in this country.

Leaving aside all the usual arguments about the harmfulness of marijuana as opposed to tobacco and alcohol, here’s a question to ponder: if you were getting high at a party with Bill O’Reilly and Miss Universe, which would be the bigger narc?