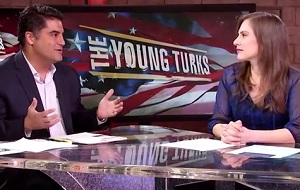 As far as Beckel goes, I agree with Ana and Cenk, Bob Beckel is the living personification of the Democratic Party…from 1953. Where I think they miss the point is that Beckel wasn’t really unaware of who Behar is, that’s just how the Fox News folk roll. Their way of insulting people is pretending they don’t know who they are, or whether they still exist.

That tendency was revealed to me the very first time I contacted Fox News on a story (in this case, a rare instance of agreement over a la carte cable), and their VP of communications, Rich White (I know, is that his name, or their demographic?) spent several hours in meetings hammering out this statement about filmmaker Robert Greenwald: “”Is Greenwald still alive, or is it just his career that’s dead?”

Coincidentally, that story also happened to deal with a short film that Greenwald had made about Fox’s tendency to rail against smut, while simultaneously exploiting it.

Since then, I’ve had somewhat mixed feelings about this subject. Fox News certainly didn’t invent the practice of showing some anchor-leg. Remember Mary Hart and her million-dollar gams? And, honestly, if you have to watch Fox News (like so many of us do), isn’t it better to have some sort of distraction?

On the other hand, I’ve noted in the past that Fox producers have a tendency to linger on the under-the-desk shot of Megyn Kelly, an accomplished journalist with whom I often disagree, but whose work I really enjoy, and while Megyn does have terrific legs, I can’t help but feel offended. And a little bit creeped-out.

In all fairness, I can’t say with authority that MSNBC never lingers on Alex Wagner‘s or Tamron Hall‘s creepers, but let me say this: I’ve never noticed MSNBC lingering on Alex Wagner’s or Tamron Hall’s legs, and I’m pretty sure I would have noticed that. They’re definitely not doing any Sharon Stone shots of Ed Schultz.

Apart from Megyn Kelly and Kirsten Powers, I don’t know many of Fox’s female hosts and contributors, but I do know many incredibly attractive women from other outlets, and to a woman, they have earned their positions, so I’m loathe to get too worked up about Fox’s antics where this is concerned. To make it in TV news, it helps to be gorgeous and qualified, no matter where you go. As long as Fox stops short of an upskirt cam, they’re really only guilty of taking what everyone else is doing a few steps farther.